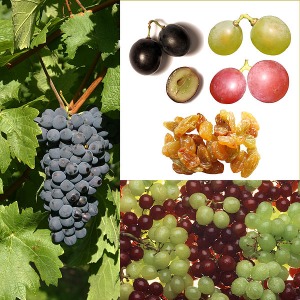 Description: The Uva de mesa embolsada “Vinalopó” is a DOP Spanish grape which comes exclusively into the "Extra" and " 1st Class" categories of Regulation (EEC) 1730/87. The varieties are Aledo, Italia and Rosetti, all white.

Method of production: Espalier- or arbour-trained vines, the pruning and cultivation of which are regulated. The appropriate varieties are Aledo, Italia and Rosetti. After ripening, the bunches of grapes are covered with bags made of cellulose film which remain in place until harvesting.

Link:The practice of bagging grapes dates from 1919. The climate is Mediterranean with a mean temperature of roughly 16C, plenty of sunshine and less than 300 mm rainfall. Limy soils deriving from Miocene marls and sandstones.