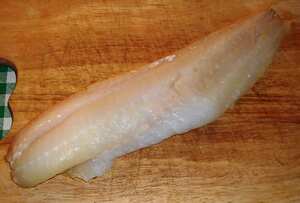 PGI ‘Traditional Grimsby Smoked Fish’ are defined as fillets of cod and haddock, weighing between 200 and 700 grams, which have been cold smoked in accordance with the traditional method within the defined geographical area. They are cream to beige in colour, with a dry texture and a smoked slightly salty flavour. They are sold to a range of outlets, as processed, in purpose built cartons (whose weight must not exceed 5 kilos) or in individual vacuum packs.

The minimum inspection procedures require that:

For preparation of the processed product:

(i) each producer is on a register of producers kept by the Traditional Grimsby Fish Smokers Group;

(ii) the fish are usually purchased from the fish market at Grimsby. A written record of all the purchased fish must be kept;

(iii) checks against this written information will be made by the nominated inspection body.

Traceability of the Processed Product:

(i) information relating to the producer (contact details and identification number); the product (type, weight, and best before date) must be included on the packaged fish when it is sold;

(ii) a written record of all sales must be kept by the producer;

(iii) checks to ensure compliance with these requirements will be made by the nominated inspection body.

Fresh whole fish are usually sourced from Iceland, Faroe and Norway but can be sourced from other areas. Skilled filleters fillet the whole fish by hand. The filleted fish are then immersed in brine, for 10 to 15 minutes and then drained on metal rod racks known as speats at the end of the working day. The fish on the speats are put into the smokehouse chimneys at heights that suit the cold smoking process.

The fish are then removed from the smokehouses and allowed to cool. Once cooled, they are packed into interleaved shallow purpose built cartons or in individual vacuum packs for transportation to a range of outlets both within the UK and abroad.

The characteristics of ‘Traditional Grimsby Smoked Fish’ are linked to the geographical area on the basis of tradition, reputation, the smoking process and the skills of those involved in the process. Skills which have been passed down from generation to generation. The tradition and processes involved can be proven and demonstrated back to the late 19th century. Grimsby has been synonymous with fish smoking in the UK since 1850 when the railway first allowed the rapid transportation of smoked fishh to London and eventually to every corner of the country. At that time, of course, no refrigeration equipment or ice making capability now used so extensively in the preservation of fresh and perishable produce such as fish existed. In order to keep and extend the shelf-life of their perishable products the choice was salting, drying, smoking or a combination of all of these. Traditional fish smoking in Grimsby has continued to be successful despite the preference for mechanical kilns in other parts of the country.

The port of Grimsby is unique in England in that it is sited on a promontory, which separates the Humber Estuary from the North Sea. This position exposes the port to cool dry winds off the sea and estuary which aid the process of traditional fish smoking by keeping mean summer maximum temperatures below 20 degrees Celsius, which is significantly cooler than inland. Grimsby's position on the east coast has a second advantage of being a place in the UK which is least prone to humid rain bearing south westerly winds which prevail in most other parts of the UK. It has a maritime climate, which means that although there are only small fluctuations in seasonal weather on a day to day basis the weather can be changeable.

The knowledge built up over years of smoking fish in the port is essential in anticipating these changes. This starts with buying the right type of fish; the condition of which alters radically as it pass through its annual breeding cycle. Grimsby is fortunate in that it can source its fish from such a wide area that an experienced buyer can normally find some fish which is suitable for smoking whatever time of the year. In order to smoke the fish successfully the fish smoker has to allow for the many variables of fish, season and weather as previously described. In Grimsby generations of expertise enables the traditional fish smoker to produce a consistent quality product by touch and eye alone.

Across the UK the town of Grimsby is synonymous with the processing of fish. The port and town regard it as a matter of pride that for over a century the many fish merchants have been able to supply most types of fish to anywhere in the country and more recently even further into Europe. ‘Traditional Grimsby Smoked Fish’ is one of the most important products associated with the port.

For much of the first half of the twentieth century the port of Grimsby was the largest fishing port in the world. Its position amongst names such as Vigo, Esbjerg, Boulogne Sur Mer and Bremerhaven with which the town is twinned is unassailable. The town today is still the largest centre of fish production in the UK with 106 companies currently members of the Grimsby Fish Merchants Association. This diverse merchanting base has always been the port's strength and has resulted in Grimsby Fish Markets pivotal role in wet fish sales not only in the UK but also at a European level.

The experience and expertise required to smoke fish successfully in the traditional way can only be learnt over many years with the knowledge often being handed down over generations. This in contrast to the modern mechanical kiln, which is a sealed oven that is electrically heated and regulated simply by turning dials. Due to these sustainable sources and being able to take advantage of Grimsby's strategic position at the centre of a chilled fish distribution network daily supplies of freshly smoked fish can be guaranteed anywhere in the country.

The Guild of Fine Food Retailers have recognised this commitment to quality by giving awards to the ‘Traditional Grimsby Smoked Fish’. Their importance as a distinctive quality regional product has also been recognised by a number of chefs and food writers as demonstrated by references to the product in Rick Stein's ‘Food Heroes’ and Henrietta Green's ‘Food Lovers Britain’.