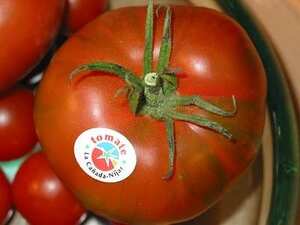 Tomate La Cañada is an IGP Spanish tomato from Almería.

— ‘Redondo Liso’: is intense and very dark in colour, with an intensely green peduncle and an exquisite ripening colour.

— ‘Tomato Cereza’ (including the ‘cocktail’ variety): the fruit of this variety is distinguished by its flavour, sugar content and tolerance to splitting. It produces clusters which are long and well- divided.

— ‘Asurcado’: has ribbed, uniform, dark-coloured fruit, with a very intensely green peduncle and an exquisite flavour.

— ‘Oblongo o Alargado’: has fruit which is very uniform, ovoid in shape, of consistent quality and excellent flavour, and is distinguishable from fruit of the other types by its less acidic flavour and the fact that it grows on branches forming a fan shape.

The geographical area of production of tomatoes covered by the IGP ‘Tomate La Cañada’ consists of land located on the hydrogeological units 06.11 (Campo de Níjar) and 06.12 (Andarax-Almería) corresponding to the districts of Campo de Níjar y Bajo Andarax in the province of Almería (Spain). Both units are composed of aquifers affected by salinisation and whose facies are predominantly made up of sodium chloride. The fields irrigated using water from these aquifers are also affected by salinisation. These particular aspects of the defined area have an impact on the specific character of the product.

The total surface area of both hydrogeological units is 901 km 2.

The defined geographical area is located in south-eastern Spain within the province of Almería, hemmed in to the north by large mountain ranges (Sierra Nevada and Sierra de Los Filabres), further to the south by Sierra Alhamilla and Sierra Cabrera, and to the west by the Sierra de Gador. To the south and east the area is bordered by the Mediterranean Sea.

Soils: The flat terrain stretching from the fertile valley of the River Andarax (Almería) to the plains of Níjar is composed of alluvial soils. Elsewhere, sand dunes and sandy material predominate, comprising 95 % sand.

There are deep soils which in most cases have developed from limestone, are generally poorly fertile and subject to intense erosion.

The soils of the defined geographical area are affected by salinity, notably as a result of using water for irrigation which is rich in salt from the hydrogeological units 06.11 and 06.12, whose facies consist predominantly of sodium chlorides. The two groups of soils predominant in the area are calci salic fluvisols (very saline soils) and sali-cumulic anthrosols, which are also markedly saline, thereby making the soil in which the ‘Tomate La Cañada’ is cultivated conform to the definition of a salino-sodic soil.

The fields within the defined geographical area have high electrical conductivity, reflecting the high salinity levels of the majority of soils in the area, as a result of the high proportion of exchangeable chlorine and sodium. Tomatoes with the IGP must be grown in soils whose conductivity is equal to or greater than 4,5 dS/m and whose pH is less than 8,5.

Water: The irrigation water used on holdings where ‘Tomate La Cañada’ is grown comes exclusively from the hydrogeological units 06.11 and 06.12. The water contains sodium chlorides and much iodine, and has high electrical conductivity. The predominant ions in the irrigation water are sodium, chlorides, sulphates and calcium, such that the Cl – and Na + ions are found in concentrations of 40 % and 35 % respectively, which are greater than those in irrigation water in the other growing areas.

The electrical conductivity of the irrigation water in the defined geographical area of the IGP ‘Tomate La Cañada’ must be at least 2,5 dS/m (water which is already considered quite saline and gives rise to significant decreases in production).

Climate and orography: In general, the defined geographical area falls within an area classified in climatic terms as arid (aridity curve from 3 to 6) and subdesert, i.e. the most arid region of Europe, characterised by a lack of frosts and such low rainfall that it can be referred to as an arid desert environment.

The characteristics of this aridity are low rainfall, average annual rainfall ranging between 200-400 mm, a high average annual temperature of between 16,8 and 18,3 °C and an atmosphere which is strongly conducive to evaporation.

Rainfall is torrential and irregular from month to month and year to year. These natural conditions, along with the hydrogeological characteristics of the area, explain the lack of surface water, making it necessary to draw continually on groundwater resources.

The high average annual temperature, along with low average annual precipitation, results in strong evapotranspiration and limited drainage, allowing soluble salts to remain in the soil permanently and raising the soil’s electrical conductivity.

Some of the climatic characteristics of the defined geographical area are the product of the general atmospheric circulation which defines the climate of mainland Spain. At the same time, however, the relative position of the area within the Iberian land mass (i.e. in the south-eastern corner, the furthest possible location from the path of the air masses which contribute to the Peninsula’s climate) and the strong influence of the large expanse of the African desert play a determining role.

In addition to these factors the local conditions, with the area being hemmed in to the north by large mountain ranges such as Sierra Nevada and Sierra de Los Filabres, to the south by Sierra Alhamilla and Sierra Cabrera, and to the west by Sierra de Gador, which isolates the area from climatic influences from the north and from westerly and northerly winds, and the position of the area adjacent to the Mediterranean Sea to the south and east, also have an influence.

The district’s position to the leeward of the northerly air masses and given its latitude and the influence of the Mediterranean, confer on it exceptional thermal conditions. The average annual relative humidity is around 73 %, which remains largely stable throughout the year, not always resulting in condensation. This means that the area has very few foggy days.

The factors affecting the quality and specific characteristics of the ‘Tomate La Cañada’ (luminance, vitamin C content and lycopene content) are the irrigation water (chlorinated sodium compounds, sourced exclusively from the Campo de Níjar and Andarax Almería hydrogeological units), the soil as a source of nutrition (salino-sodic soils irrigated with this saline water), and special environmental conditions peculiar to the area (sunshine, temperature and humidity).