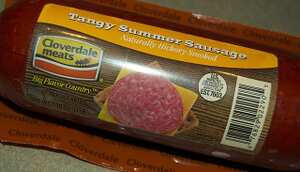 Summer sausage is the general term for any sausage that can be kept without the need of refrigeration. Summer sausage is usually a mixture of pork and other meat such as beef and venison. Summer sausage can be either dried or smoked, and curing ingredients can vary significantly, although some sort of curing salt is almost always used. Seasonings may include mustard seeds, black pepper, garlic salt, or sugar.

In spite of its name, summer sausage actually tends to be made in the autumn, during traditional hunting seasons in North America and Europe. Summer sausage, like all sausages, makes use of leftover scrap meat and organ meat that would otherwise be wasted.