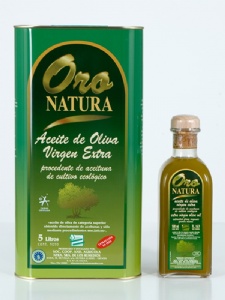 The oils have the medium to intense fruity aroma of the green or ripe olive, reminiscent of wild fruits, with a slightly bitter and sharp flavour, well-balanced and pleasing to the palate.

The area in which the oil is produced, processed and packaged coincides with a natural sub-region within the Sierra de Cádiz region, occupying the north-eastern part of that province. It is hemmed in between sierras such as those of Lijar and Algodonales and closed off in the south-west by the Sierra de Grazalema. It lies adjacent to the ‘Sierra de Grazalema’ National Park, in which two of the municipalities forming part of it are situated, a factor demonstrating the area's special environmental characteristics.

The processing and packaging area coincides with the production area.

Processing is limited to extracting from the olive its juice, all of whose characteristics are retained, and obtaining a natural product appreciated for its distinct qualities.

The various aspects featuring in the production of virgin olive oil of the Sierra de Cádiz designation of origin are set out below:

The traditional groves are over 100 years old, have steep slopes and are divided into numerous parcels. There is no practice of irrigation; the land is tilled, and on parcels not suited to mechanisation tilling with mules continues.

Two factors are to be borne in mind: the timing of the harvest and the method used.

Harvesting takes place over a period extending from November to February/March. The picking methods are different but tend always to be along traditional lines, inflicting the least possible damage to the fruit.

An essential feature of olive picking in the Sierra de Cádiz is the separating of the fruit picked directly from the tree from that on the ground.

Conditions of transport ensure that the fruit suffers as little as possible.

Prior to their arrival at the oil mill, the olives from the ground are separated from those from the tree.

The most appropriate machinery and procedures are used for the purpose of obtaining the best extra virgin olive oil. The phases are as follows: cleaning and washing, storage, pressing, crushing, separating the liquid matter from the solid matter (systems in two or three phases) and separating the various liquid phases (by centrifugation or a mixed system).

It is the natural mix of varieties, ‘Lechín’ being the leading one, and the characteristics and peculiarities of this sierra region that have produced an extra virgin olive oil featuring differing qualities known from early times as ‘aceite de la Sierra de Cádiz’ (Sierra de Cadiz olive oil).

The olive cultivation tradition in this area has over the ages been reflected in various writings and accounts, the most representative examples of which are as follows:

‘Olvera’, a township whose name comes from the Arabic name ‘Wubira’, which in turn stems from the existence in that area of a multitude of ‘oliveras’ (cf. Olvera), i.e. olive groves (‘olivares’).

The works of Madoz and Igartuburu, among others, dating back to the 18th century, recount that the olive oils from Algodonales are first-rate, both as regards quantity and quality.

Pruna and its long-standing tradition should also be mentioned: in 1886 a family oil mill was set up there and is still operational today. Also, the Illustrated Geographical Dictionary dating back to 1833 tells us that in Setenil de las Bodegas there were four oil mills. The dictionary also mentions Zahara de la Sierra and its wonderful olive oil, which is described as ‘agreste, montaraz, frutado como ningún otro’ (rustic, rugged and fruity as no other).

In El Gastor, four oil mills operated in the post war period; two of these are preserved today as vestiges of the past.

The Sierra de Cádiz region features two different types of relief: on one side, the Grazalema massif and on the other, the north-western part where the olive-growing areas proper are situated; the Guadalete River separates these two constituent parts.

The soils of the Sierra de Cádiz are poor, ruling out most crops, except arable ones in flat areas and olives on the steeper slopes.

The Sierra de Cádiz enjoys a very different type of climate from the rest of the province on account of its altitude, which can reach 1,800 meters. It is among the coldest areas in the province of Cadiz, owing to its distance from the sea. Rainfall is in excess of 600 litres per year.

It is in the areas of the Sierra de Cádiz where other crops cannot thrive that groves are situated, olive trees finding it easy to take root on marginal land, slopes and stony terrain. The holdings are small, many of them with a surface area of between 5 and 10 hectares, and olives are their main crop.

The groves are generally old and situated on land where mechanisation is difficult, their high degree of adaptability having encouraged their establishment on the most marginal land. The steepness of many parcels' slopes mean that tilling and harvesting are still carried out today with the help of mules.