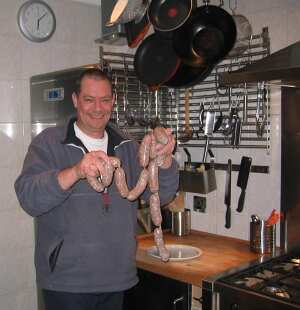 This is really just an answer to a question, but I have added it to this page for the benefit of anyone interested.

Sausages. Assuming you have made your own, can you recommend a sausage machine? Would like to attempt homemade morcilla when I have the courage. --JuliaBalbilla 07:04, 18 January 2009 (UTC)

Sorry, only just spotted this. Although I did have a sausage machine, it was HUGE, about 2-plus feet long with loads of pipes and oddments plus a handle. The sausage casings also stank the fridge out, and had a limited life. In all, it was a bit of a palaver and I gave it away as it just took up too much valuable (storage) space. Now if I make sausages, they are consumed immediately so I just make them as burgers. I would only consider using a sausage machine to make sausages that could be smoked, cured and kept for a length of time, and my bacon satisfies those needs!.

If you have a large mixer/ food processor, you may be able to get a sausage attachment for that instead of a dedicated sausage machine. It was not expensive, just ridiculously bulky. --Chef 13:56, 25 January 2009 (UTC)