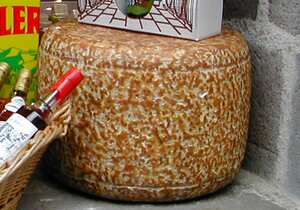 Salers is a hard cheese from the volcanic region in the mountains of Auvergne. It is made from unpasteurised Salers cows’ milk between the 15 April and 15 November. It is similar to Cantal - which is produced from the same cows' milk when they are fed on hay during the remaining months of the year - and has been estimated to have been fabricated in this region for at least 2000 years.

Salers has benefited from AOC protection since 1979 and also has the AOP seal. It is best eaten between September and March, after an ageing time of 9 months, but it is also excellent all year round.

It is circular in shape, weighing around 40 kg.

If the Salers cheese is not listed below, select a similar type of cheese from the list below to get a rough idea for the number of calories in Salers cheese.