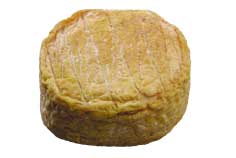 Saint Winoc is an unpasteurised cows' milk cheese which was originally produced at Saint-Winoc Abbey in the Nord-Pas de Calais region of France. It is now made by a few local producers. Of medium strength, the pressed, uncooked cheese is washed in beer. It has a pungent, yeasty aroma and palate which ripens as the cheese matures.