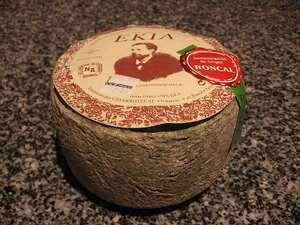 It has a hard rind, which produces some of the mould that gives it a bluish-grey colour and a velvety texture. Its shape is cylindrical with sharp edges, and weighing between 2 and 3 kilos, it is between 8 and 12 cm high. Roncal has a sharp flavour, slightly spicy and very buttery on the palate, which is achieved by ageing the cheese for over 4 months.

The cheese can be ordered on line from IberGour. However it will be shipped from Spain and payment is in Euros.