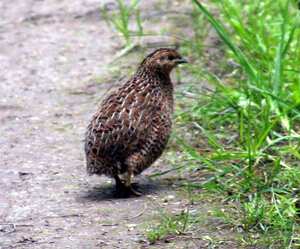 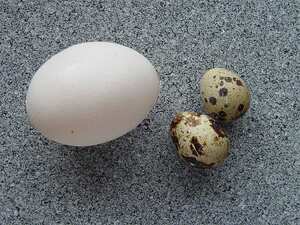 Quail is a collective name for several genera of mid-sized birds in the pheasant family Phasianidae. New World quails (family Odontophoridae) and buttonquails (family Turnicidae) are not closely related but named for their similar appearance and behaviour.

Quails are small, plump terrestrial birds. They are seed eaters but will also take insects and similar small prey. They nest on the ground and are capable of short, rapid bursts of flight. Some species such as the Japanese and Common Quail are migratory and fly for long distances. Some quail are farmed in large numbers. The Japanese Quail (or coturnix quail) is kept mostly to produce eggs. The quail family of birds includes edible game species. The Common Quail was previously much favoured in French cooking, but quail for the table are now more likely to be domesticated Japanese Quail. The Common Quail is also part of Maltese cuisine and Portuguese cuisine, as well as in Indian cuisine such as a bhuna. Quails are commonly eaten complete with the bones, since these are easily chewed and the small size of the bird makes it inconvenient to remove them.

Quail eggs are considered a delicacy. They are sometimes used raw in sushi and often found in Japanese Bento lunches. In Colombia, quail eggs are less exotic than in many other countries, and a single hard-boiled quail egg is a common topping on hot dogs and hamburgers, often fixed into place with a toothpick. In the Philippines, kwek-kwek is a popular street food delicacy, which consists of soft-boiled quail eggs dipped in orange-coloured batter before being skewered and deep-fried.

Quail is at its best and in season during the following months: June, July, August & September.