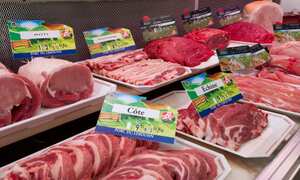 IGP Porc du Limousin is Limousin farm pork characterised by its maturity (182 days old on the date of slaughter), its taste, deriving from a minimum percentage of fat, and its technical qualities (dripping meats excluded by means of genetic and carcass testing

Geographical area : The Limousin region (comprising the départements of Haute-Vienne, Creuse and Corrèze) and the Charente Limousine district, which forms a homogeneous territorial unit in terms of natural features and agricultural activity.

Evidence : Evidence of the product's origin is provided by means of an identification mark (tattoo) stamped on each pig by the breeder. At the abattoir, each carcass is identified with an ink stamp and a numbered label. Documentary records supplement this monitoring system (declaration of birth, labelling register, material accounting by the breeder and the abattoir staff). The pigs, which are systematically tattooed, are all raised on the piggeries where they were born. They are the result of careful genetic selection to avoid dripping meats. Their diet is based on cereals from the region, 20% of which is maize, and they are housed in the most comfortable conditions possible for their 26 weeks on the farm. After slaughter, the carcasses are rigorously graded and are marketed within a restricted sales network, which is largely confined to the Limousin region

Link : The link with the geographical origin of the product derives essentially from the reputation of Limousin pork:

- a historical reputation that was particularly widespread in the 19th century and the first half of the 20th century; the production of pork led to the creation of an important charcuterie industry;

- the present-day reputation of Limousin pork is attested by the redevelopment of this pork production and by the use of Limousin pork by regional charcuterie manufacturers in their "top-of-the-range" cured meats.

History : Since the 19th century, Limousin has been a major pork-producing region with a charcuterie industry that remains very active today.

Gastronomy : The IGP Porc du Limousin can be conserved for a few days in the refrigerator, stored in the coldest compartment. It can be cooked in different ways also depending on the cut chosen. Anyway, a slow cooking is suggested, as it enables the meat to remain tender in the centre. The recipes are many: grilled, roasted, in the pressure cooker. It is ideal for barbecue, as it combines perfectly with a smoked taste. Its flavour can be enhanced with aromatic herbs like thyme, bay and savory, which are perfect for all pork dishes.