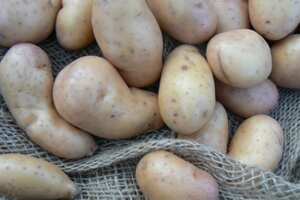 IGP/BGA Plate de Florenville is a potato (Solanum tuberosum L.) of the old French variety ‘Rosa’. This late to semi-late variety has a very long dormancy and its cultivation requires on average 120 days in the ground. The tubers of ‘Plate de Florenville’ have the following varietal and physical characteristics:

‘Plate de Florenville’ belongs to the group of firm-fleshed cooking potatoes. Its culinary characteristics (based on the internationally accepted potato variety examination criteria with a view to entering it in the Belgian catalogue) are:

Consequently, according to the internationally accepted categorisation used for entering potato varieties in the Belgian catalogue, ‘Plate de Florenville’ is classified in group A (A – AB – BA), the group of potatoes ideal for being used in salads, steaming or being cooked in their skins. From an organoleptic point of view, ‘Plate de Florenville’ is characterised by a fine, delicate and intense taste and by a pleasant firmness in the mouth. It is not at all floury and therefore has a watery feel.

‘Plate de Florenville’ may be marketed as a fresh or ware potato. Its very long dormancy means that it can easily be stored for a long time, without risk of early and uncontrolled germination. Apart from the production of seed potatoes, all aspects of production (from planting the tubers to storing the harvest) must take place in the defined area. The preparation/packing operations may take place throughout the European Union.

Chiny (former municipalities before the merger of Izel and Jamoigne),

The geographical area linked to the name ‘Plate de Florenville’ corresponds to an area located in the south of Belgium called ‘Lorraine belge’ or — from a geological and agricultural point of view — ‘Région jurassique’. It is the only region of Belgium dating from the secondary era. More specifically, the ‘Plate de Florenville’ production area is located in a part of that Jurassic region called Gaume (a historical and geographical name).

The specific contours of its cuestas, with south-facing land, is one of Gaume's main characteristics. Moreover, protected from cold winds and rain from the north by the Ardennes hills, which are higher in altitude, Gaume is the region which marks the transition between the temperate maritime climate in the north of the country and a continental climate. This difference is characterised by a broader range of temperatures, a larger number of summer days, more hours of sunshine, less precipitation and less-strong winds.

The subsoil composition (chalky) is an additional favourable factor because it retains heat well. The two pedological layers which stretch out around Florenville correspond to limy, slightly sandy soils which are well ventilated and well drained and heat quickly, unlike the clayey, heavy and poorly drained soils found in the surrounding areas. Over time, the growers noticed that soils of this type (limy-sandy or sandy-limy) produced better quality ‘Plate de Florenville’. They therefore identified the parcels with these soils and used them to grow ‘Plate de Florenville’. This reflects the acquisition of specific and unique know-how linked to growing this potato variety.

The railways probably played an important role in establishing these potatoes' reputation. In 1880 the former municipality of Florenville acquired a railway station on line 165 linking Virton to Bertrix. On a larger scale, that line linked — and still links — Arlon, Namur and Brussels (the central point of the rail network in Belgium). The description ‘de Florenville’ probably comes from the label affixed to the wagons leaving Florenville station, to which production from the surrounding areas was taken via by-roads. The potato therefore took the name of the station from which it was transported.

The main characteristics of ‘Plate de Florenville’, apart from its colour and shape, are that it holds together very well during cooking and that it has a fine, delicate taste. The potato remains whole, does not disintegrate and keeps its shape well, even after being cooked for a long time. This quality enables it to be classified in culinary group A. It is therefore ideal for salads, as well as for steaming or for cooking in its skin. Its flavour is intense, delicate and very fine. There is sometimes a hazelnut taste. Its intense taste is closely linked to its small tubers, its aromatic components being more concentrated than in large tubers. These two characteristics result from the low level of dry matter (< 20 %) specific to ‘Plate de Florenville’.

The name ‘Plate de Florenville’ has existed for at least a century, as the references below demonstrate:

References to seed potatoes called ‘Plates’ started appearing in Belgian historical sources from the mid-19th century onwards. In 1860 Edouard de Croeser de Berges compiled a register of 128 potato varieties in Belgium which described ‘Plate’ as being of good quality, relatively high-yield and disease-free. This variety is also found in the ‘Almanach agricole belge’ of 1899. ‘Plate de Florenville’ has a local, national and international reputation. This is borne out, in particular, by the ‘Fête de la Pomme de Terre’ (potato festival), which has taken place in Florenville for a weekend in October since 1994. This event is covered by the regional press (‘L'Avenir du Luxembourg’ in 2011, 2012 and 2013, for example), but also outside Belgium (references in the French newspaper ‘L'Union-L'Ardennais’ in 2013). ‘Plate de Florenville’ is likewise referred to in the national press (‘Le Soir’, ‘La Libre Belgique’ and the Dutch-language daily ‘De Standaard’), as well as in the international press (‘Le Figaro’ (France), for example). It also appears in several Gaume tourist guides. Moreover, its culinary qualities mean that it is included on the menus of several restaurants, which present it as a fine and typical dish, for example:

Greatly appreciated by consumers, ‘Plate de Florenville’ is recognised as being a low-productivity potato of very good quality. Its price proves this. Several sources dating from the first half of the 20th century attest to the fact that this potato cost more than others. Nowadays it is still more expensive in the shops (EUR 1,99/kg) than any other firm-fleshed potato variety, for example the ‘Charlotte’ (EUR 1,20/kg).