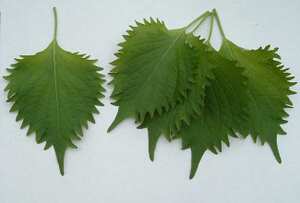 Perilla is a genus of annual herb that is a member of the mint family, Lamiaceae. In mild climates the plant reseeds itself. The most common species is Perilla frutescens var. japonica or shiso which is mainly grown in India and East Asia. There are both green-leafed and purple-leafed varieties which are generally recognised as separate species by botanists. The leaves resemble stinging nettle leaves, being slightly rounder in shape. It is also widely known as the Beefsteak plant.

In North America, it is increasingly commonly called by its Japanese name, shiso or red shiso, in addition to being generally referred to as perilla. Its essential oils provide for a strong taste whose intensity might be compared to that of mint or fennel. It is considered rich in minerals and vitamins, has anti-inflammatory properties and is thought to help preserve and sterilise other foods. In Nepal and parts of India, it is called silam. Its seeds are ground with chili and tomatoes to make a savoury dip/side dish.

It is sometimes known as purple mint, Japanese basil, or wild coleus (although it is not a mint, basil or coleus).