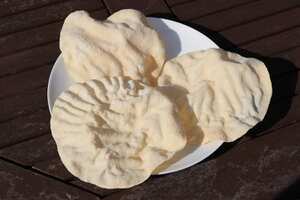 Microwaved poppadoms!
The best and healthiest way to cook them.

The poppadom (for alternative names see end of page) is a thin Indian wafer, sometimes described as a cracker or flatbread.

An important part of Indian cuisine, recipes vary from region to region and family to family, but typically it is made from lentil, chickpea (gram), black gram or rice flour. In North India, the lentil variety is more popular and is usually called 'papad'. Salt and peanut oil are added to make a dough, which can be flavoured with seasonings such as chili, cumin, garlic or black pepper. Sometimes baking soda is also added. The dough is shaped into a thin, round flat bread and then dried (traditionally in the sun) and can be cooked by deep-frying, roasting over an open flame, toasting, or microwaving, depending on the desired texture.

Papadums are typically served as an accompaniment to a meal in India. It is also eaten as an appetiser or a snack and can be eaten with various toppings such as chopped onions, chutney or other dips and condiments. In certain parts of India, raw papadums (dried but unroasted) are used in curries and vegetable preparations. Papadums are made in different sizes. Smaller ones can be eaten like a snack chip and the larger ones can be used to make wraps.

You do not need to fry poppadoms, it's cleaned, quicker and healthier to cook them in a the microwave - recipe here.