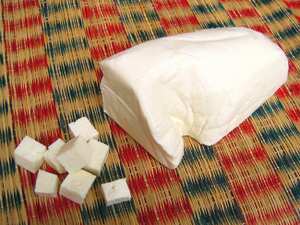 Paneer is the most common Persian and South Asian cheese. It is an unaged, acid-set, non-melting farmer's cheese made by curdling heated milk with lemon juice or other food acid. The process is similar to queso blanco except that paneer does not have salt added. Paneer is very closely linked to the Turkish Peynir which is also strained and squeezed the same way.

Most varieties of paneer are simply pressed into a cube and then sliced or chopped, although the eastern Indian variety (chhana or chhena) is beaten or kneaded like mozzarella, and crumbles more easily than the North Indian variant of paneer. Paneer is one of the few types of cheese indigenous to the Indian subcontinent, and is widely used in Indian cuisine and even some Middle Eastern and Southeast Asian cuisine. Unlike most cheeses in the world, the making of paneer does not involve rennet, and is therefore completely vegetarian. Paneer is a source of protein for Hindu vegetarians.

Firm tofu has a similar texture and consistency so it can be used in place of paneer as a non-dairy substitute.

If the Paneer is not listed below, select a similar type of cheese from the list below to get a rough idea for the number of calories in Paneer.