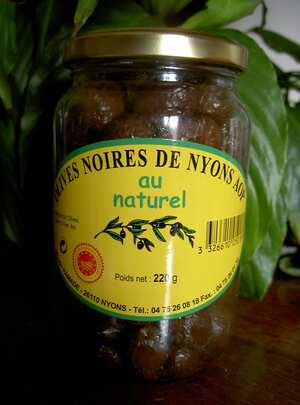 The olives are harvested when overripe and are finely corrugated due to the first frosts of December and January. Usually they are prepared in the regional canneries with the traditional method. The olives are put into salt brine with water and sea salt to eliminate their bitter taste for about six months. Then they are conserved into 8% salt brine.

AOP Olives noires de Nyons feature a characteristic colour called "monk habit". Outside they are finely corrugated and have a big stone. They have a flavour of ripe olives.

The production area of AOP Olives noires de Nyons covers 53 municipal areas: 35 in the department of Drôme and 18 in Vaucluse, in the regions of Rhone-Alps and Provence-Alpes-Azur.

The history of AOP Olives noires de Nyons is closely linked to the tradition of olive growing in the region which goes back to ancient times and has been maintained until the beginning of the 20th century. Its decline, which was due above all to the competition with seed oils, made it a complementary cultivation. To avoid its disappearance, after the strong frosts of 1956, the producers have managed to conserve the heritage represented from this growing. The traditional production was preserved thanks to the skills and tenacity of producers.

AOP Olives noires de Nyons must be conserved into their original salt brine, protected from light, air and heat sources. It can be eaten alone or used to season some cold and warm dishes. They can be used to prepare aperitifs, antipasto with salad, but they can be also served with sausages, raw vegetables, but also with warm dishes like meat ragout and spaghetti.

The product is sold as AOP Olives noires de Nyons. It is marketed in glass pots of different sizes.

The Tanche olive is a typical fruit of the production area and, being ideal for a climate with strong contrasts, it features unique characteristics which give to AOP Olives noires de Nyons their unique taste and scent peculiarities.