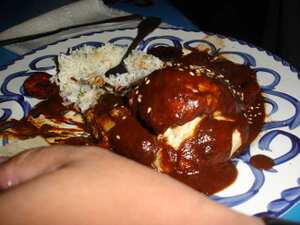 Mole, (Mexican Spanish, from Nahuatl mulli or molli, "sauce") is the generic name for several sauces used in Mexican cuisine, as well as for dishes based on these sauces. In English, it often refers to a specific sauce which is known in Spanish by the more specific name mole poblano. The word is also widely known in the combined form guacamole (avocado mole). In contemporary Mexico, the term is used for a number of sauces, some quite dissimilar to each other and include black, red, yellow, colorado, green, almendrado, pipián.

Mole poblano, whose name comes from the Mexican state of Puebla, is a popular sauce in Mexican cuisine and is the mole that most people in the U.S. think of when they think of mole. Mole poblano is prepared with dried chilli peppers (commonly ancho, pasilla, mulato and chipotle), ground nuts and/or seeds (almonds, indigenous peanuts, and/or sesame seeds), spices, Mexican chocolate (cacao ground with sugar and cinnamon and occasionally nuts), salt, and a variety of other ingredients including charred avocado leaves, onions, garlic. Dried seasonings such as ground oregano are also used. In order to provide a rich thickness to the sauce, bread crumbs or tacos are added to the mix. The chicken or turkey is cooked by completely boiling it in a pot with water, a little bit of salt and a piece of onion to give the broth some flavour.

One of the more popular dishes which includes mole is mole poblano de guajolote, or turkey (Mexican Spanish guajolote, from Nahuatl huexolotl) prepared with mole poblano. In Mexico today, mole de guajolote is widely regarded as the country's national dish.

Another somewhat less popular mole is mole de cacahuate, made of ground peanuts and chiles and also typically served with chicken.

Mole verde achieves its distinctive green colour from the toasted pumpkin seeds that form the sauce's base.