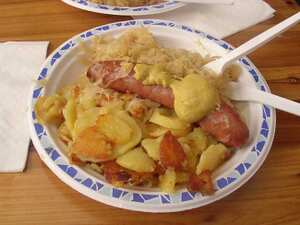 Mettwurst is a strongly flavoured German sausage made from raw minced pork, which is preserved by curing and smoking. The southern German variety is soft and similar to Teewurst. Braunschweiger mettwurst is smoked somewhat but still soft and spreadable, while other northern German varieties such as the Holsteiner are harder and more similar to salami, due to longer smoking. The Low German word mett, meaning minced pork without bacon, is derived from the Old Saxon word meti (meaning food), and is related to the English word 'meat'. Mettwurst can be cooked or fried or spread on rye bread with onions and eaten raw.

Due to the large German immigration to South Australia (for example, the town of Hahndorf), mettwurst (sometimes spelled metwurst) is very common and is created in the North German style. It is often used in school lunches and for snacks during parties. Well-known South Australian brands include Linke's, Steiney's, Kallekske, Wintulich and Barossa Fine Foods.

The town of Mineola, Iowa, which was settled almost exclusively by immigrants from Schleswig-Holstein, hosts an annual heritage dinner with "Schoening-style" cold-smoked Mettwurst known in the Low German dialect as "Metvuss".