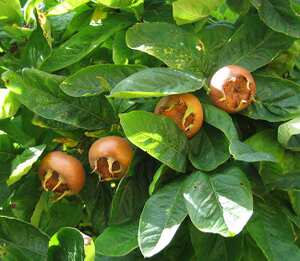 Medlar (Mespilus) is a genus of two species of flowering plants in the subfamily Maloideae of the family Rosaceae. One, Common Medlar Mespilus germanica, is a long-known native of southwest Asia and possibly also southeastern Europe, and the other, Stern's Medlar Mespilus canescens, was recently (1990) discovered in North America.

Medlars are deciduous large shrubs or small trees growing up to 8 m tall. The leaves are dark green and elliptic, six to fifteen centimetres long and three to four centimetres wide. The leaves turn a spectacular red in autumn before falling. The five-petalled white flowers are produced in late spring. The fruit is a pome, two to three centimetres in diameter, with wide-spreading persistent sepals giving a "hollow" appearance to the fruit.

Medlar fruit are very hard and acidic. They become edible after being softened ("bletted") by frost, or naturally in storage given sufficient time. Once softening begins, the skin rapidly takes a wrinkled texture and turns dark brown, and the inside reduces to a consistency and flavour reminiscent of apple sauce. They can then be eaten raw, often consumed with cheese as a dessert, although they are also used to make medlar jelly and wine. Another dish is "medlar cheese", which is similar to lemon curd, being made with the fruit pulp, eggs, and butter.

The medlar is native to Persia and has an ancient history of cultivation; it was grown by the ancient Greeks and Romans, beginning in the 2nd century BCE. The medlar was a very popular fruit during the Victorian era; however, it is now a rarely appreciated fruit, except in certain areas, such as the north of Iran.