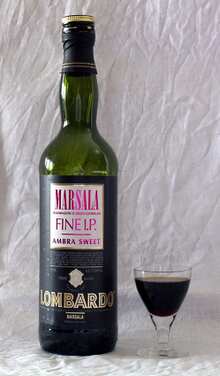 Marsala is a wine produced in the region surrounding the Italian city of Marsala in Sicily. Marsala wine first received Denominazione di origine controllata, or DOC, status in 1969.

While the city's natives sometimes drink "vintage" Marsala, the wine produced for export is universally a fortified wine similar to Port. Originally, Marsala wine was fortified with alcohol to ensure that it would last long ocean voyages, but now it is made that way because of its popularity in foreign markets.

Marsala is produced using the Grillo, Inzolia, and Catarratto white grape varieties, among others.

Marsala contains about 15-20% alcohol by volume. Different Marsala wines are classified according to their colour, sweetness and the duration of their ageing. The three levels of sweetness are secco (with a maximum 40 grams of residual sugar per litre), semisecco (41-100 g/l) and sweet (over 100 g/l). The colour and ageing classifications are as follows:

Marsala wine was traditionally served as an aperitif. Contemporary diners will serve chilled with Parmesan, Gorgonzola, Roquefort, and other strong cheeses, or at room temperature as a dessert wine.