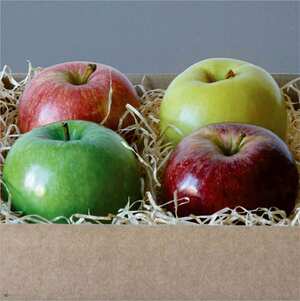 Manzana de Girona is an IGP apple from Spain.

Apple of the species Malus domestica Borkh L of the 'Golden', âRed Deliciousâ, 'Gala' and âGranny Smithâ groups of varieties. As a result of local environmental conditions the apples have a hardness of 1,5 to 2 kg, i.e. above that of fruit of the same varieties grown elsewhere.

Accounts for 60 % of the production of protected apples in the area.

Accounts for 20 % of the production of protected apples in the area.

Accounts for 5 % of the production of protected apples in the area.

Tree: vigorous, with a drooping appearance, characteristic of a rapid entry into production.

Accounts for 15 % of the production of protected apples in the region.

Land situated at the north-eastern tip of the autonomous community of Catalonia. Comprises all the Gerona province municipalities of Selva, Baix EmpordÃ , Alt EmpordÃ , El GironÃ¨s and Pla de l'Estany.

The total area under cultivation in the area is 3 650 hectares, with 2 152 hectares of apple orchards. The area likely to be covered by the IGP is 1 518 hectares.

The apples come from orchards situated in the production area.

The stations where they are selected and packed are located in that area and are on an official list kept by the Regulatory Council. Apples which, at the production and packing stage, meet the required standards, in particular the physical and chemical and organoleptic tests, are marketed under the protected geographical indication and a numbered label issued by the Regulatory Council.

Apples belonging to authorised varieties are grown in accordance with integrated production methods and, when they have reached the correct degree of ripeness, are harvested as quickly and as carefully as possible.

The entire process, from production to labelling, takes place in the production area.

â Historical: Apples have, together with other tree-fruit crops, long been one of the traditional crops of the Selva, Baix EmpordÃ , Alt EmpordÃ , GironÃ¨s and Pla de l'Estany districts in the province of Gerona.

The earliest documented reference to the presence of apple trees locally comes from the district of Selva and dates back to the year 1300: the seal of the Massaneda family with, at its centre, an apple tree. The name Massaneda may itself have come from an early word for apple tree: Manzaneda.

In his Diario de los viajes hechos en CataluÃ±a, Francisco de Zamora describes in detail everything he saw in the course of his journeys in Catalonia. He states, for instance, that there are already apple orchards in the Plana de Bas. He refers also to the cultivation and consumption of apples in several villages, including Sant Hilari Sacalm, whose high birth rate was said by the local priest to be attributable to apples. Writing about a small village close to ArbÃºcies, de Zamora points out that a variety of exquisite apple trees abound in the area, the most famous of which are those known as ciri. Referring to the market held at Santa Coloma de Farners, the capital of the district of Selva, he states that large quantities of pine kernels and apples are sold there which are later sent to MahÃ³n, Valencia, Cartagena, Cadiz and elsewhere.

There is accordingly a fully fledged apple culture, given that the fruit plays such a major role in the economy and in the diet of its people and animals. The wide range of varieties and the numerous methods of preserving them have helped to ensure a varied and sustained supply.

According to the gastronome Jaume FÃ brega the apple is traditionally the most highly esteemed local dessert fruit: it can be traced back to the 18th century at least pommes cuites (baked apples) or the delicious botifarra dolÃ§a amb poma (sweet Catalan sausage with apple).

Large-scale commercial apple-growing dates back to the beginning of the 20th century. In the 1930s attempts were already being made to produce premium-quality fruit in the area, using local varieties. A major development in the mid 1960s was the setting up of large-scale storage and marketing cooperatives.

Natural: The Manzana de Girona has a homogeneous production area in terms of soil and climate, thus lending itself to apple-growing. This set of factors provides the manzana de Girona with very marked characteristic flavour and hardness that are recognised and appreciated by consumers.

The area's topsoil consists of material recently deposited by rivers. The land is flat, poses few problems of erosion and features good drainage.

The climate is Mediterranean, i.e. mild and fresh, with sharp differences between daytime and night-time temperatures and this, together with high relative humidity and sunshine at the end of spring, gives the fruit good colouring and a high sugar content.

The rows of trees are laid out from north to south so that an even amount of light falls on the leaves and fruit. The branches are trained along a central axis.

- Cultivation and pruning: in accordance with the most modern cultivation techniques. Removal of the older material by heavy pruning. The aim is to find a natural balance for the tree, i.e. letting in a sufficient amount of light and allowing the production of quality fruit.

- Harvesting: begins in mid-August in the case of Gala, September in the case of Golden and Red Delicious and the middle or end of October in the case of Granny Smith. At all events it is dependent on pre-set physical and chemical parameters (penetrometry, refractive index (Brix) and starch regression rate) and so may vary from one year to the next.