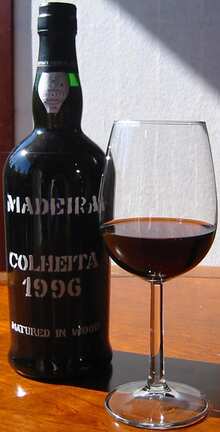 Madeira is a fortified Portuguese wine made in the Madeira Islands. The wine is produced in a variety of styles ranging from dry wines which can be consumed on their own as an aperitif, to sweet wines more usually consumed with dessert. Cheaper versions are often flavoured with salt and pepper for use in cooking. The islands of Madeira have a long wine making history dating back to the Age of Exploration when Madeira was a standard port of call for ships heading to the New World or East Indies. To prevent the wine from spoiling, neutral grape spirits were added. On the long sea voyages, the wines would be exposed to excessive heat and movement which transformed the flavour of the wine as the wine producers of Madeira found out when an unsold shipment of wine returned to the islands after a round trip. Today, Madeira is noted for its unique wine making process which involves heating the wine up to temperatures as high as 60 °C (140 °F) for an extended period of time and deliberately exposing the wine to some levels of oxidation. Due to this unique process, Madeira is a very robust wine that can be quite long lived even after being opened. Most countries limit the use of the term Madeira or Madère to only those wines that come from the Madeira Islands. In Europe, this principle is enshrined in the European Union by Protected Designation of Origin (PDO) status.