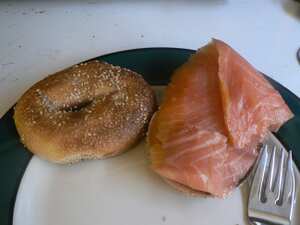 Lox with a bagel

Lox is salmon fillet that has been cured. In its most popular form, it is thinly sliced—less than 5 millimetres (0.20 in) in thickness—and, typically, served on a bagel, often with cream cheese and capers. Noted for its importance in Ashkenazic Jewish cuisine, the food and its name were introduced to the United States through Eastern European Jewish immigrants. The term lox derives from Lachs in German and לאַקס laks in Yiddish, meaning "salmon". It is a cognate of Icelandic and Swedish lax, Danish and Norwegian laks, Czech losos, and Old English læx.

Sometimes called regular or belly lox, lox is traditionally made by brining in a solution of water or oil, salt, sugars and spices (the brine). Although the term lox is sometimes applied to smoked salmon, that is a different product.