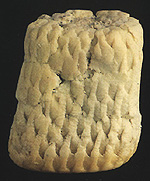 La Armada is an artisan cheese made from unpasteurised goats’ or cows’ milk or a mixture of both. The production area is mainly in the villages of Vegamián, Lillo and Reyero in La Armada (León) and there are three varieties:

Sobada – produced almost always from goats’ milk and allowed to mature for two months to one year. It has a strong, sour, bitter and spicy taste.

Mortera – usually produced with a mixture of goats’ and cows’ milk and has an ivory colour. It has various size holes and is matured for only 20 days. It is not as strong as Sobada.

Quemón – a softer cheese with a dark yellow colour, stronger flavour and more pungent aroma than the other two. It matures for up to one year.

The cheese, of which 80% is produced for home consumption has an irregular cylinder shape with the top marked by folds of cloth used as a mould. The rind is mouldy and the cheese weighs roughly 1 – 1.5 kg. Sometimes is can be matured for as long as three years.