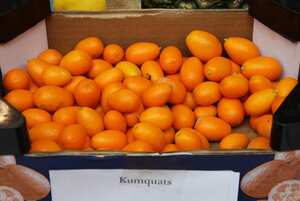 The kumquats or cumquats are a group of small fruit-bearing trees in the flowering plant family Rutaceae, in the genus Fortunella which may better be included in Citrus as it is often done. The edible fruit closely resembles that of the orange (Citrus sinensis) but is smaller and is often oval.

They are slow-growing, evergreen shrubs or short trees, from 2.5 to 4.5 metres (8 to 15 ft) tall, with dense branches, sometimes bearing small thorns. The leaves are dark glossy green, and the flowers pure white, similar to other citrus flowers, borne singly or clustered in the leaf-axils. The kumquat tree produces 80 to 100 fruit each year. The tree can be hydrophytic, and fruit is often found floating near the shore during the kumquat season.

Kumquats originated in China (they are noted in literature dating to the 12th century), and have long been cultivated there and in Japan. They were introduced to Europe in 1846 by Robert Fortune, collector for the London Horticultural Society, and shortly thereafter into North America. Originally placed in the genus Citrus, they were transferred to the genus Fortunella in 1915, though subsequent work (Burkill 1931, Mabberley 1998) favours their return to inclusion in Citrus.

Kumquats readily hybridise with other members of the genus Citrus and with the closely related Poncirus. These hybrids are known as Citrofortunella; examples include the limequat, orangequat, and calamondin.

In appearance the kumquat fruit (generally called simply "kumquat") resembles a miniature oval orange, 3 to 5 centimetres (1.2 to 2.0 in) long and 2 to 4 centimetres (0.8 to 1.6 in) wide. Depending on variety, peel colour ranges from yellow to red. A Nagami kumquat has an oval shape, while a Marumi kumquat is round.

Kumquat fruit is generally in season from late autumn to mid-winter, and can be found in most food markets with other produce. Its taste is very sour, like a very acid orange.

Kumquats are eaten raw most of the time. As the rind is sweet and the juicy centre is sour and salty, the raw fruit is usually consumed either whole, to savour the contrast, or only the rind is eaten. The fruit is considered ripe when it reaches a yellowish-orange stage, and has just shed the last tint of green. The Hong Kong Kumquat has a rather sweet rind compared to the rinds of other citrus fruits.

Candied kumquat from China that has been flattened, sugared, and dried.

Culinary uses include: candying and kumquat preserves, marmalade, and jelly. Kumquats appear more commonly in the modern market as a martini garnish, replacing the classic olive. They can also be sliced and added to salads. A liqueur can also be made by macerating kumquats in vodka or other clear spirit.

The Cantonese often preserve kumquats in salt or sugar. A batch of the fruit is buried in dry salt inside a glass jar. Over time, all the juice from the fruit is extracted through dehydration into the salt. The fruit in the jar becomes shrunken, wrinkled, and dark brown in colour, and the salt combines with the juice to become a dark brown brine. A few salted kumquats with a few teaspoons of the brine/juice may be mixed with hot water to make a remedy for sore throats. A jar of such preserved kumquats can last several years and still keep taste.

In Taiwan, kumquats are a popular addition to both hot and iced tea.

Removing the wax coating from kumquats

Here are a couple of methods that you can use to remove wax from kumquats:

How much does one cup of kumquat flesh weigh?