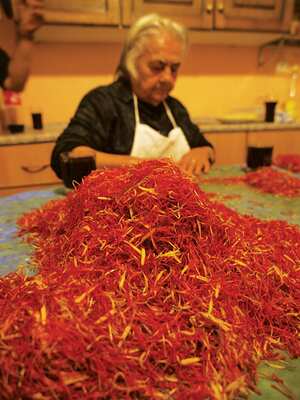 Krokos Kozanis (Κρόκος Κοζάνης) is a ΠΟΠ (POP) Greek saffron crocus being a corm-rooted plant of the iris (Iridaceae) family. The corm is 2 to 3 cm in diameter, spherical and fleshy with brown-grey reticulate integuments. Each corm produces one to three erect conoid flowers in October/November. After several hours these open losing their first shape. They consist of:

The stigmas are a lustrous to orange colour, length 40 to 50 mm together with part of the style. Their top end is serrated and under their weight they incline downwards, often outside the conoid. The saffron crocus is grown for the orange red stigmas of the flower and secondarily for the three yellow stamens. Its uses are many and various: in pharmacy, baking, cookery, cheese-making, pasta production, the drinks industry and artists' paints.

The name krokos comes from the Greek word kroki (the woof thread that the shuttle knits to the warp). The word krokos either by itself or in compounds (krokinos, krokovaptos, krokoessa, etc.) is known from the earliest texts of world literature. Thus the word krokos as an aromatic and flower is found in the Book of Proverbs and in Song of Solomon 3 in the Old Testament. It is also found denoting the flower or pigment in Homer (Hymn 178 to Demeter mentions the Krokesian flower), Sophocles, Theophrastes, Aristophanes, Hippocrates, etc. The saffron crocus as an plant with distinctive properties (pigment, medicine, herb, seasoning) was known both in Ancient Greece and to other ancient peoples. It is claimed that it was grown in Greece during the Middle Minoan period. This view is supported by a wall-painting of the period (1600 BC) called the Saffron Gatherer found in the Palace of Knossos on Crete showing a youth, a girl or, according to others, a monkey gathering crocus flowers into a basket. It is also claimed that the Greeks grew saffron crocuses in both Macedonian and Byzantine times and that it spread to the East with the campaign of Alexander the Great.

Cultivation of the saffron crocus in the above-mentioned areas of the Prefecture of Kozani dates back to the 17th century. The cultivation procedure, the specific soil and climatic conditions of the area and the specialist knowledge used in growing the plant lead to a product of the best quality with particular characteristics.

The flowers that begin to appear in the middle of October are gathered by teams, normally of women, into aprons or baskets and taken back to the houses in panniers.

The laborious work, calling for manual dexterity, continues from sunrise almost to sunset and lasts 20 to 25 days. At the house another set of two people place the flowers in small quantities on a special table and with the aid of a current of air - electric fans are now used to separate the petals from the stamens and the stigmas.

Drying of the stigmas is the most important and most delicate procedure and requires skill, great care and experience. If the crocus is dried properly it retains its distinctive properties (colour/aromatic qualities) unaltered and improves in quality without losing its colouring power and essential oil.

The fresh stigmas are laid out in fine layers on frames with a wire-mesh or silk base.

These are placed in large well-ventilated heated rooms and after drying separation begins of the red stigmas from the yellow stamens, pollen and foreign matter.

This work, carried out by hand, lasts from 20 to 60 days. The dry product is placed, red and yellow separate, in containers ready for delivery.

Collection begins immediately after drying, sorting and cleaning of the stamens and under the Articles of Association of the cooperative finishes at the end of March.

On delivery at the cooperative's premises a check is made on moisture content, since there is a danger of fungal proliferation and hence deterioration of the product. A moisture level of 8 to 11.50% is acceptable. A second quality check is made and any foreign material (grit, dry grass, leaves, hairs, etc.) removed. If a significant quantity of pollen is found the saffron is sieved. The saffron of each producer is then weighed and the responsible official issues the take-over note. A check for foreign material is made when the saffron is bagged. The staff make a fastidious visual check on the very small quantities involved.

The saffron is packed in three kilogram metal recipients or 12 kilogram plastic drums which are then kept in a refrigerated chamber at 5­C.

Small quantities are disposed of to the market in packages of one, two, four and 28 grams. This saffron is for use as a seasoning in various foods.

Much smaller quantities are also sold in powder form. The saffron threads are passed through a dryer to remove some of the moisture and allow them to be crumbled. After grinding the powder is transferred to a special packaging machine producing sachets containing from 0.25 to one gram.

The characteristics of the product are due to the particular soil and climatic conditions of the area (well-tended, light, drained soil of medium fertility with a warm temperate climate) and to the cultivation techniques employed and traditional practices followed by the area's crocus growers. This is one of the main production sectors of the area, playing a prominent role in the economy of the production zone in particular and more generally in the wider area of the Prefecture of Kozani.

Traditional crocus growing is also an important element of the area's culture and an important factor in maintenance of the natural environment. With the passage of the centuries it has become an integral part of the daily life of the inhabitants of the area.