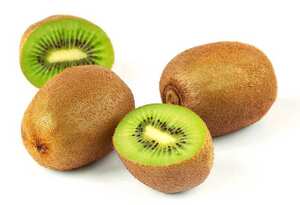 Originally known as the Chinese Gooseberry as it originated in Southern China, where it is known as The "National Fruit" of the People's Republic of China.

Cultivation spread from China in the early 20th century, when seeds were introduced to New Zealand by Mary Isabel Fraser, the principal of Wanganui Girls' College, who had been visiting mission schools in Yichang, China. The seeds were planted in 1906 by a Wanganui nurseryman, Alexander Allison, with the vines first fruiting in 1910. 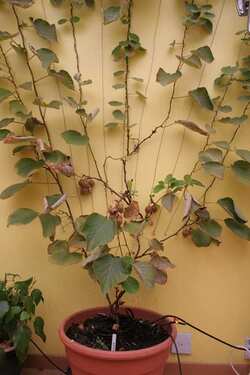 "Jenny", growing in our conservatory

Kiwifruit can be eaten whole, like an apple (and, rarely, even including the skin, which increases the tartness), cut in half and eaten like a passion fruit or peeled and sliced, like a pineapple. For people who prefer not to eat the skin, the fruit can be cut in half and then the flesh scooped out with a spoon. Kiwifruit is sometimes sold with a spife, a plastic tool designed for this purpose with a spoon at one end and a knife at the other. Another method is to slice the fruit into several rounds about 5 mm (¼ in) thick, possibly cutting each round into quarters, and serving it, skin-on, as a platter or with plain yogurt.

Kiwifruit can be peeled using a potato peeler, drawing up from the bottom towards the thicker, harder end where the fruit was attached to its branch. Cutting "against the grain" releases juice which lubricates the blade and a swifter, cleaner cut results. If the kiwifruit is to be used in cooking,such as ice cream,the kiwifruit can be quickly peeled in a similar manner to a tomato. The kiwifruit is immersed for 10-30 seconds in boiling water,then placed in cool water. The skin is then scored with a sharp knife and peels easily away from the fruit. This however leaves a "slimy" texture on the outside of the fruit which may make the fruit usable only in situations where it is to be mashed, or diced.

Kiwifruit can be grown in the UK, preferably in a greenhouse or conservatory. However, to ensure that you get fruit, you will probably need a self-fertile variety such as "Jenny".

Kiwi fruit are at their best and in season during the following months: January, February, March, April, May, June, July & August.