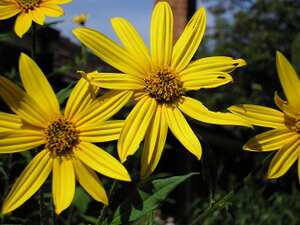 The Jerusalem artichoke (Helianthus tuberosus), also called the sunroot or sunchoke or earth apple or topinambur, is a species of sunflower native to the eastern United States, from Maine west to North Dakota, and south to northern Florida and Texas. It is also cultivated widely across the temperate world for its tuber, which is used as a root vegetable.

The artichoke part of the Jerusalem artichoke's name comes from the taste of its edible tuber. Samuel de Champlain, the French explorer, sent the first samples of the plant to France, noting that its taste was similar to an artichoke.

Unlike most tubers, but in common with other members of the Asteraceae (including the artichoke), the tubers store the carbohydrate inulin (not to be confused with insulin) instead of starch. For this reason, Jerusalem artichoke tubers are an important source of fructose for industry.

Jerusalem artichokes are easy to cultivate, which tempts gardeners to simply leave them completely alone to grow. However the quality of the edible tubers degrades unless the plants are dug up and replanted in fertile soil. This can be a chore, as even a small piece of tuber will grow if left in the ground, making the hardy plant a potential weed. 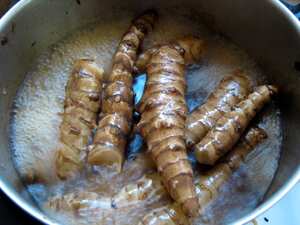 The tubers have a consistency much like potatoes, and in their raw form have the same taste as potatoes except with crispness and a slight powdery note. The carbohydrates give the tubers a tendency to become very soft and mushy if boiled, so it is best to steam them lightly if it is desired to preserve their texture. The inulin is not well digested by some people, leading to the misconception that sunchokes are not edible or an assumption that they cause flatulence and gastric pain. Gerard's Herbal, printed in 1621, quotes the English planter John Goodyer on Jerusalem artichokes:

"which way soever they be dressed and eaten, they stir and cause a filthy loathsome stinking wind within the body, thereby causing the belly to be pained and tormented, and are a meat more fit for swine than men."

Jerusalem artichokes are sold in the produce departments of many supermarkets. They are usually pre-packaged in a plastic tray labeled for speciality food sales, but some stores carry them loose in baskets or bins, where they look like kiwi-sized gnarled potatoes or ginger root. The freshest roots are plump and vibrant in appearance. If they are left too long in the open, they become wrinkled and soft and can develop a bitter taste. Fresh and steamed they have a mild, sweet and nutty flavour.

Jerusalem artichokes are at their best and in season during the following months: November, December, January & February.