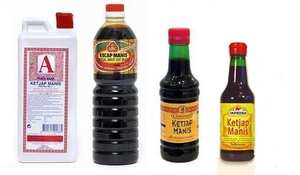 Kecap Manis: According to Robin An authority on oriental cuisine and author of the photograph: "For now, I think I prefer the second, ABC-brand. And I do not like the third, Conimex."

In Indonesia, soy sauce is known as kecap (also ketjap or kicap), which is a catch-all term for fermented sauces, and cognate to the English word "ketchup". Five main varieties of Indonesian kecap exist:

Salty soy sauce, which is very similar to Chinese light soy sauce, but usually somewhat thicker and has a stronger flavour; it can be replaced by light Chinese soy sauce in recipes.

Kecap manis is a flavoured sweet soy sauce, which has a thick, almost syrupy consistency and a pronounced sweet, treacle-like flavour due to generous addition of palm sugar. In cooking, it may be replaced by molasses with a little vegetable stock stirred in. Recipe here

Medium sweet soy sauce, which has a less thick consistency and a more saline taste than Manis.