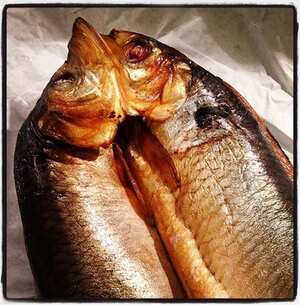 Herrings are small, oily fish found in the shallow, temperate waters of the North Atlantic, the Baltic Sea, the North Pacific, and the Mediterranean. There are 15 species of herring, the most abundant of which is the Atlantic herring. Herrings move in vast schools, coming in spring to the shores of Europe and America, where they are caught, salted and smoked in great quantities. Canned "sardines" (or pilchards) seen in supermarkets may actually be sprats or round herrings.

Pickled herring is a delicacy popular in Europe and has become a basic part of Jewish cuisine. Most cured herring uses a two-step curing process. Initially, herring is cured with salt to extract water. The second stage involves removing the salt and adding flavourings, typically a vinegar, salt, sugar solution to which ingredients like peppercorn, bay leaves and raw onions are added.

In Scandinavia, once the pickling process is finished and depending on which of the dozens of classic herring flavourings (mustard, onion, garlic, lingonberries etc.) are selected, it is usually enjoyed with dark rye bread, crisp bread, or potatoes. This dish is a must at Christmas and Midsummer, where it is enjoyed with akvavit.

In the Middle Ages the Dutch developed a special treat known in English as soused herring or rollmops. The word Rollmops, borrowed from Dutch language and German, refers to a pickled herring fillet rolled (hence the name) into a cylindrical shape around a piece of pickled gherkin or an onion. 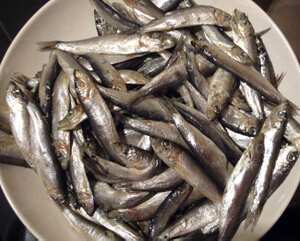 Whitebait are young fish; in Europe the term applies to young herring, but in other parts of the world it is used for similar fish of other species. Whitebait are tender and edible. The entire fish is eaten including head, fins and gut but typically each 'bait' is only 25-50 mm in length and about 3 mm in cross section.