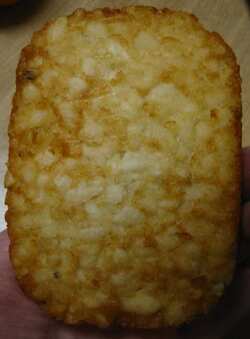 In some parts of the United States, hash browns strictly refer to shredded or riced, pan fried potatoes, and are considered a breakfast food, while potatoes diced or cubed and pan fried are also a side dish called country fried potatoes or home fries (though many variations of home fries are part cooked before frying). Some recipes add diced or chopped onions.

A chef may prepare hash browns by forming riced potatoes into patties before frying (moisture and potato starch can hold them together); however, if a binding agent is added (egg for example), such a preparation constitutes a potato pancake. Frozen hash browns are sometimes made into patty form for ease of handling, the compact flat shape can also be cooked in a toaster oven or toaster. If a dish of hash browned potatoes incorporates chopped meat, leftovers, or other vegetables it is more commonly referred to as hash.