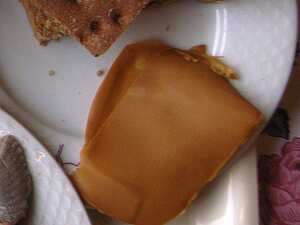 Gjetost, Gudbrandsdalsost or Brunost is a brown Norwegian whey cheese, The Norwegian name brunost means 'brown cheese'. In North America it is referred to and sold as gjetost, which is an older spelling of geitost that is no longer frequently used elsewhere. The cheese is also popular in Sweden, where it is called mesost, and Denmark, where it is called myseost.

The two most popular varieties in Norway are Gudbrandsdalsost, which means 'cheese from the Gudbrandsdal', from the Gudbrands valley (made from 24 % goats' milk and cows' milk), and the more traditional version geitost, which simply means 'goat cheese', and which is wholly or in part made from goats' milk. There are also regional varieties, which vary both in colour and taste, depending on how much caramel they contain.

Geitost has a strong, sweet, yet somewhat sharp flavour with notes of caramel and goats' milk, while Gudbrandsdalsost is similar but more mellow in taste. The two varieties are often used as an open sandwich topping, on bread, malt loaf, or together with lefse, a traditional soft Norwegian flatbread. Brunost and lefse are used in some areas as a side dish to lutefisk, a traditional dish made from stockfish.

Geitost is also used in game sauces, often together with juniper berries. It lends such sauces a more subtle, caramel taste.

Brunost is made by boiling a mixture of milk, cream and whey carefully for several hours so that the water evaporates. The heat turns the milk sugar into caramel which gives the cheese its characteristic taste. It is ready for consumption as soon as it is packed in suitable sized blocks. A low-fat variant is made by increasing the proportion of whey to milk and cream.

If boiled for a shorter time than usual, one gets the spreadable version called prim in Norwegian (or messmör in Swedish). Prim had been made in Norway for a long time when Anne Hov, a farmer's wife got the idea of putting cream into the cheese. She got a good price for her new fatty cheese, and this merchandise is said to have saved the Gudbrands valley financially in the 1880s.

Primarily a Norwegian product, the cheeses are also produced and sold in Sweden. They are also sold in the Upper Midwest, and by speciality cheesemongers and some larger supermarkets all over Europe, North America and Australia. Today several types of brunost are offered in most shops in Norway and Sweden. In Sweden, brunost called Fjällbrynt Mesost is produced by Milko in the city of Östersund. TINE meierier produce most of the brunost in Norway, while Milko is the biggest producer in Sweden. Several local dairies in Norway produce their own versions. Experimental versions with nuts and honey or chocolate have been tried, without very much success.

If the Gjetost cheese is not listed below, select a similar type of cheese from the list below to get a rough idea for the number of calories in Gjetost cheese.