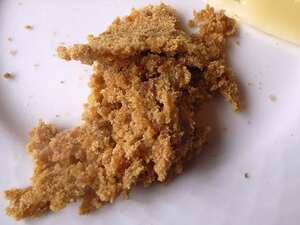 Gamalost (also Gammelost, Gammalost), which translates as "old cheese", is a pungent traditional Norwegian cheese, which was once a staple of the Norwegian diet. Like many traditional Norwegian foods, such as flat bread, dry salted meats and stockfish, Gamalost could be stored for long periods without refrigeration.

To make Gamalost, lactic starter is added to skimmed cows' milk, causing it to sour. After several days of souring, the milk is slowly heated, before the curds are separated and pressed into forms. After removal from the forms, mold is introduced onto the surface of the cheese, rubbed on by hand in the traditional method. The cheese is then allowed to cure for four to five weeks.

Gamalost production is very labor intensive, particularly if traditional methods are used, and it is not made in sufficient quantity for mass export. As such, it is rare to find the cheese outside Norway.

Gamalost is a brownish-yellow cheese with irregular blue veins. It has a sharply pronounced flavour and aroma, like Camembert, Roquefort, or Danish Blue. It is a firm often granular cheese.