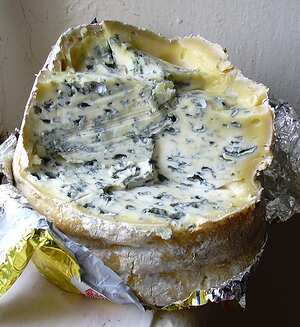 Fourme d'Ambert is one of France's oldest cheeses, and dates from as far back as Roman times. It is an AOC and AOP pasteurised, cows’ milk, blue cheese from the Puy-de-Dôme départment of the Auvergne, with a distinct, narrow cylindrical shape.

The semi-hard cheese is inoculated with Penicillium roqueforti spores and matured for at least 28 days. During this time, at weekly intervals, the cheese is injected with Vouvray moelleux, a sweet white wine.

Almost identical to Fourme de Montbrison, the two were protected by the same AOC from 1972 until 2002 when each was recognised as its own cheese with slight differences in manufacture. A likeness of the cheese can be found sculpted above the entrance to a medieval chapel in Chaulme.