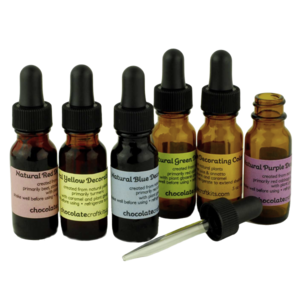 Food colouring is any dye, pigment or substance that imparts colour when it is added to food or drink. It comes in many forms consisting of liquids, powders, gels, and pastes. Food colouring is used both in commercial food production and in domestic cooking. Due to its safety and general availability, food colouring is also used in a variety of non-food applications including cosmetics, pharmaceuticals, home craft projects, and medical devices.

We associate certain colours with certain flavours, and the colour of food can influence the perceived flavour in anything from sweets to wine. Sometimes the aim is to simulate a colour that is perceived by the consumer as natural, such as adding red colouring to glacé cherries (which would otherwise be beige), but sometimes it is for effect, like the green ketchup that Heinz launched in 1999. Colour additives are used in foods for many reasons including:

Artificial colouring should be used with caution, in particular when using them in food to be given to children. In the EU, E numbers 102-143 cover the range of artificial colours and the following are approved in the EU:

Natural food colours can make a variety of different hues: