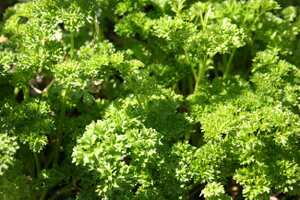 Flat leaf and curly parsley are similar in flavour, though flat leaf parsley can be slightly stronger and some varieties have a rougher texture on the tongue so need chopping finer.

In parts of Europe, and particularly in West Asia, many foods are served with chopped parsley sprinkled on top. The fresh flavour of parsley goes extremely well with fish. Parsley is a key ingredient in several West Asian salads, e.g., tabbouleh which is the national dish of Lebanon. In Southern and Central Europe, parsley is part of bouquet garni, a bundle of fresh herbs used to flavour stocks, soups, and sauces. Additionally, parsley is often used as a garnish. Persillade is mixture of chopped garlic and chopped parsley. Gremolata is a mixture of parsley, garlic, and lemon zest.

Parsley is a biennial (it lasts two years, flowering in the second year) and once germinated, which can be difficult, but assisted by soaking the seeds overnight, will grow with ease in most conditions, including window boxes or pots.

Coriander would work as an alternative on some dishes and also visually although there really isn't much that can take it's place for flavour.

How much does one cup of parsley weigh?