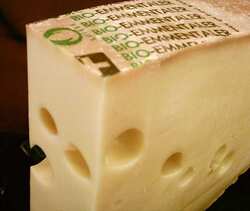 Emmental, Emmentaler AOC, Emmenthal, or Emmenthaler is a cheese from Switzerland. It is sometimes known as Swiss cheese, although Swiss cheese does not always imply Emmental.

The cheese originally comes from the Emme valley in the canton of Bern. Unlike some other cheese varieties, the denomination "Emmental" was not protected ("Emmentaler Switzerland" is, though). Hence, Emmental of other origin, especially from France and Bavaria, is widely available. Even Finland is an exporter of Emmental cheese.

Emmental is a yellow, medium-hard cheese, with characteristic large holes. It has a piquant, but not really sharp taste. The holes in the cheese are cause by carbon dioxide gasses, released by active bacteria.

It is a great cheese to cook with and is often used in fondues and goes well with garlic.

If the Emmental cheese is not listed below, select a similar type of cheese from the list below to get a rough idea for the number of calories in Emmental cheese.