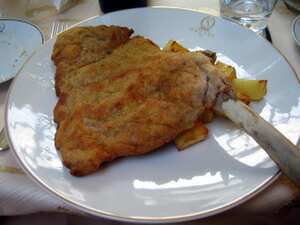 Cotoletta (from "Costoletta" = "little rib" by the rib attached to the meat during and after the cooking) is an Italian language word for a cooked veal cutlet with breading.

Cotoletta alla Milanese (Milanese after its place of origin, Milan), which is a deep fried cutlet somewhat similar to Wiener schnitzel, but is "bone-in", braised in clarified butter and traditionally uses veal exclusively from suckling calves. It's very often served with Risotto alla Milanese. Another type of milanese is the cotoletta a orecchio di elefante ("elephant ear cutlet"), which uses a thinner but larger cut of meat, and is deboned and tenderized prior to frying, similar to American preparation of breaded pork tenderloin, this is the most common cotolette eaten in Italy in every day life because it's easy and fast preparation but its thin meat and very deep "fry" make them not appreciated by the chefs because of it very strong taste of "fry" and in the typical Osteria of Milan the first version is way more common.

Cotoletta alla palermitana (palermitana because it takes origin from Palermo, Sicily) is pretty much very similar to a milanese but the veal is smeared with lard or olive oil instead of butter, and then grilled instead of being deep fried. The breadcrumb is very often mixed with oregano and/or a bit of Parmesan cheese, it can be put on the grill upon a leaf of lemon that gives it a particular Sicilian scent, something that worths to be noted is that this cutlet is, between its "sisters" (tonkatsu, schnitzel, milanese, American style breaded meat etc.), the only one that has its breading made without eggs.

Various preparations of breaded meat made in Latin America were inspired by the cotoletta and are known as milanesas.