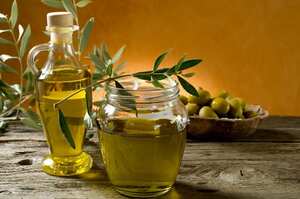 Colour: from green to yellow

Flavour: fruity, with a hint of a pungent, bitter taste.

The production area of "Colline Salernitane" DOP oil includes part of the administrative area of the province of Salerno.

"Colline Salernitane" extra virgin olive oil has very ancient roots, originating from autochthonous varieties such as Rotondella and Carpellese, which have always been grown in the province of Salerno. Added to these varieties several decades ago were the Frantoio and Leccino varieties, which adapted perfectly to the environment. In the province of Salerno, olive trees are an essential element of the landscape, the culture and the environment, and over the centuries the olive has become a part of daily life in this community (customs, traditions, etc.). "Colline Salernitane" oil has become well known and has been marketed mainly within the region.

"Colline Salernitane" extra virgin olive oil is produced from healthy olives, harvested by December 31 of each year. The per hectare yield of olives may not exceed 12,000 kg/ha in the specialized olive groves, with a maximum oil yield of 20%. The only extraction methods permitted are those physical and mechanical processes which most faithfully preserve the particular and original characteristics of the fruit.

The particular qualities of "Colline Salernitane" oil come from the particular nature of the area, which has unique soil, climatic, landscape, historical, cultural and economic connotations. The area is dominated by unusual, rugged calcareous rock formations and medium-high hilly altitudes, characterized by limestone-dolomite seams surrounded and enclosed by layers of calcareous and siliceous-marly detritus, with a typical folded structure. The qualitative characteristics of the local olive oil production are favourably influenced by the typically Mediterranean climate, the mild temperatures and precipitation concentrated in the autumn-winter months, which make it a markedly distinctive environment, and by the farming techniques and traditional methods used to obtain the product.