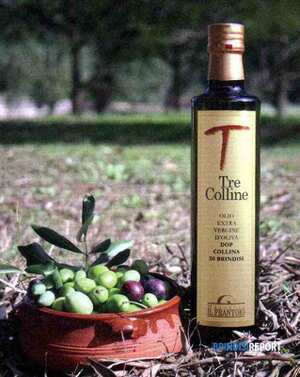 - Flavour: fruity, with a hint of pungent and bitter flavour

Other chemical-physical parameters are in conformity with current EU regulations.

The growing of olives in this area goes back many centuries. The first historical documents are notarial deeds from the 12th century regarding the sale of olive oil. However, it is clear that the planting of olive-groves goes back even farther. Starting in the Middle Ages, olive oil began to be used as a highly valued form of currency; it was in fact used for purchasing livestock or other goods needed by families in that period. The centuries-old olive-groves today alternate with newer groves, producing an oil with a refined, delicate flavour, typical of the DOP Collina di Brindisi.

The DOP Collina di Brindisi includes the oils obtained from olives grown and processed in the eight communes of the province of Brindisi, where the lowlands give way to the rocky terrain of the upland plains. These oils have long been traditionally used by local and national consumers. The dominant variety in these areas is the Ogliarola or Chiarita, called the "Olea łapy già" by Pliny long ago, and is characterised by a very high oil yield. It is still possible to see today the olive-groves planted in previous centuries, especially in the communes of Fasano and Ostuni. Time has also brought about a natural selection which has favoured the variety mentioned by Pliny. Today the landscape alternates between centuries-old trees and younger groves, whose fruits maintain nonetheless the same qualitative characteristics.

Extra virgin olive oil is highly perishable and it is therefore important that it is stored correctly in order to maintain its organoleptic characteristics. It should be kept in a cool, dark place at a temperature between 14 and 18°C, away from heat sources and other foods that release odours. It should be consumed within four to six months of pressing to fully appreciate its qualities. The DOP Collina di Brindisi extra virgin olive oil is ideal for dressing meat and fish-based dishes, vegetables and bruschetta, although it is also used as an ingredient in cakes and desserts.