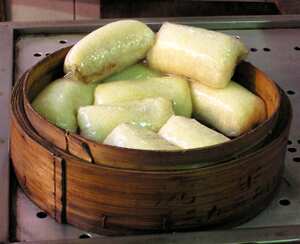 Cí fàn tuán is a kind of food in Chinese cuisine, originating from Shanghai. It is made by tightly wrapping a piece of youtiao (fried dough) around some glutinous rice. It is usually eaten as breakfast together with sweetened or savoury soy milk in Eastern China, Hong Kong and Taiwan.

In recent years, there have been innovations on the traditional ci fan tuan, originating from Hong Kong and Taiwan, then reverse-introduced into Shanghai and its vicinity. Today, ci fan tuan is commonly available in two varieties. The "savoury" variety includes ingredients such as zha cai (pickled vegetable), rousong (pork floss) and small pieces of youtiao being wrapped in the rice ball. The "sweet" variety adds sugar and sometimes sesame to the filling.