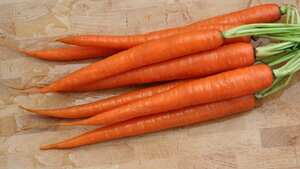 Shape: cylindrical with a rounded tip, no root hairs. — Colour: intense orange, including the neck.

Physical characteristics: crunchy flesh, breaking cleanly. For all varieties, the commercial grade should be Extra and Prima.

Proof of Origin: Field cultivation of carrots began in the Altopiano del Fucino in 1950. The considerable income generated by the crop caught the attention of the farmers who consequently introduced carrots into the classic crop rotation in use in the Altopiano del Fucino. Together with the economic benefits, carrot cultivation has extended the length of the crop rotation cycle, significantly reducing problems such as the development of plant diseases or the phenomenon of soil fatigue which has caused so many problems for crops in Fucino. In this regard, it should be emphasised that the right crop rotation is now relied upon for controlling sugar beet and potato nematodes — again made possible thanks to the introduction of the carrot — unlike the past approach of using fumigant nematicides.

The success of this crop makes it the key crop within the Altopiano del Fucino vegetable sector, as can also be seen in its popularity and renown on both national and foreign markets. This renown leads many producers to use the name ‘Fucino’ to market products that come from other production areas. This means that there is a need to guarantee the origin of the product through procedures to ensure the traceability of the various phases of production and checks on the producers and land areas where the Fucino carrot is grown, which should be listed in special registers.

Method of Production: The production techniques are the usual methods of carrot cultivation which can be broken down into the following steps: Preparing the sowing bed by ploughing, milling to refine the surface, rolling, and fertilising without manure (to avoid browning the roots as a result of the organic matter decomposing during the growing cycle). Sowing is entirely mechanical to ensure uniform distribution of the seeds and optimal crop density. The seed is planted in rows 35-40 cm apart, while within the row the seeds are planted in bands 5- 7 cm wide, or alternatively in continuous double rows. The seed is planted at a depth of 0,5-1,5 cm. Crop rotation must use a minimum four-year cycle.

During the summer (July and August), irrigation, if necessary, must take place during the night or at the latest in the early morning. Harvesting is carried out according to the most suitable degree of ripeness for the destination of the product and the type of packaging; it is done pursuant to the quality rules established by Community law and the characteristics set out above. When the product is intended for preservation, it should be harvested only when fully ripe and not before the period laid down for the cultivar, bearing in mind weather conditions, in order to ensure that the qualitative and organoleptic characteristics are preserved and maintained.

During the summer (July and August), harvesting must be done in the early morning or late afternoon to avoid the product being exposed to the sun. Once the carrots have been harvested, within four hours they must be transported to preparation centres where, before washing and packaging, they are chilled in order to ensure that their crunchiness, skin colour and flavour are maintained.

Link to the Geographic Area: The wide availability of the product within the area in question has encouraged related activities of preparation and packaging of the product as well as the establishment of processing plants to make the carrots into cubes or juices. All of this has contributed to creating a system which combines the excellent soil and climatic conditions of the area with the high level of specialisation of workers within the sector, whether as farmers or sellers, and the wealth of processing facilities, all of which ensures that the area is renowned for its carrots.

The Altopiano del Fucino, an area particularly well-known for vegetable production, is in south central Italy, in the region known as the ‘Regione dei Parchi’ [parks region], Abruzzo. The area is entirely flat, at a height of 700 m above sea level, 16 000 hectares in area, and surrounded by mountains of particular environmental interest such as those in the Abruzzo National Park, the Velino-Sirente park and Mounts Ernici and Simbruini. Its agricultural origins go back no further than the end of the 19th century when Prince Alessandro Torlonia completed drainage of what was considered the third main lake of Italy: Il Lago del Fucino [the lake of Fucino]. Given this, the Altopiano del Fucino can be defined as ‘a young land, very productive and uncontaminated’, which, thanks to the nature of the soil and a particularly favourable climate, gives its vegetables unique organoleptic and nutritional characteristics which are recognised and appreciated by European consumers.

The soil is sandy-loam with a high level of active lime; the pH is between subalkaline and alkaline, with high levels of organic matter that can be attributed to the abundant manuring carried out by Fucino farmers every other year. The climate is influenced by the presence of the surrounding mountain chains, the altitude and the relative humidity produced by the dense network of canals which ensure both that water needs are met during the growing season and that excess water is collected in winter. Essentially, winters are harsh and rainy while in the summer the whole area is affected by the heat, principally in July and half of August; and, as a result of the altitude, the temperature in the area varies considerably between night and day.

Following the land reclamation, crop development began with the first crops of potatoes and sugar beet, after which other crops, including carrots, were established in the Altopiano del Fucino, not just in order to have a better crop rotation but also to expand the specialisation of the farmers through their own initiative. In the carrot, Fucino has found its primary crop, thanks in part to the unique qualities that the land itself gives the product. Precisely because of the very loose and unstructured nature of the soil itself, the carrots produced in Fucino are notable for the shape of the vegetable which is mainly cylindrical with a rounded tip, free of root hairs and with no deep scarring where the leaves emerge, with a smooth skin and the whole root has an intense orange colour.

Further characteristics can be found in terms of nutrients: carrots from the Altopiano del Fucino have high, well-balanced ascorbic acid (5 mg/kg) and total sugar contents. The carbohydrate content is above average and is accompanied by a 1,2 % protein content, while the fibre content (1,8 %) makes the trace amounts (calcium, iron, phosphorus and potassium) more easily absorbed. The vitamins in ‘Carota dell'Altopiano del Fucino’ are another typical element which makes the product readily distinguishable: thiamine, riboflavin and above all carotene (> 100 mg/kg) are present at high levels.