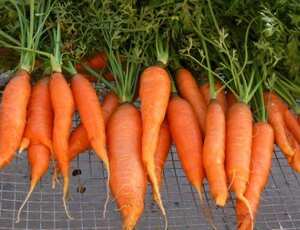 Description: PGI ‘Carota Novella di Ispica’ from Sicily and is the product obtained by growing species Daucus carota L. (the cultivated carrot). The varieties used are based on the Nantes half-long carrot variety and appropriate hybrids such as Exelso, Dordogne, Nancò, Concerto, Romance, Naval, Chambor, Selene. Other hybrids may be used provided that they belong to the Nantes half-long variety and provided that the producers have proven through tests that they comply with the quality parameters for ‘Carota Novella di Ispica’. The use of new hybrids to produce ‘Carota Novella di Ispica’ is permitted subject to favourable evaluation of the tests by the Ministry of Agricultural, Food and Forestry Policies which may request for that purpose the technical opinion of the inspection body or another body.

When placed on the market, the ‘Carota Novella di Ispica’ is cylindrical/conical in shape, with a diameter of between 15 and 40 mm and a weight of between 50 and 150 g, and does not have secondary roots, a root at the tip or cracking of the stem. ‘Carota Novella di Ispica’ reaches commercial maturity from as early as the end of February (20 February) up to the beginning of June (15 June). It is consequently available on the market in the winter-spring period, when it has the organoleptic properties typical of the fresh product. It adheres to the following specific chemical and nutritional parameters: — high glucide content: > 5 % fresh product (by weight), — beta-carotene content (depending on the production period): > 4 mg/100 g of fresh product, — mineral salt content: between 0,5 % and 0,9 %. In addition, the skin is clear, the flesh tender and the core not too fibrous.

Method of production: The production method calls for ploughing to a depth of 40 to 50 cm before sowing. Crop rotation should be carried out every three years and, consequently, carrots cannot be grown on the same land until after an interval of two agricultural years. Carrots may be grown on the same land for two consecutive years only when carrots have not previously been grown there. Crop rotation may be of the ‘open’ kind, i.e. carrots may be cultivated in rotation with field vegetables, cereals and pulses.

Crop combination of any kind is not permitted. Sowing is carried out in autumn with the help of pneumatic precision seed drills, spaced at preset intervals at a depth of approximately 1 cm, followed by rolling. Seeding density varies, according to the growing system used, between 1,5 and 2 million seeds per hectare surface area. The fertilisers applied must not exceed the following unit values per hectare: N — 150, P2O5 — 80, K2O — 240, MgO — 40, giving priority at all times to mixed organic fertilisers.

Fertilisers containing meso and micro elements may be used. Hoeing to remove weed infestation, to make the soil more friable and spread the fertiliser applied to the surface. Plant health protection is based on integrated pest control principles and is achieved through agronomic and biological action. Chemical protection is used only in cases where the infestation reaches the intervention threshold or in the event that optimum conditions for the development of certain pathogens are detected. The carrots are harvested on a daily basis from 20 February to 15 June. Harvesting is carried out with the aid of multi-functional machines capable of performing the entire harvesting phase in a single pass in the field.

The fresh product which has been harvested is processed on a daily basis on the processing lines available on holdings. The chief phases which are typical of the carrot processing process are washing, removal of waste, sorting by size and packaging. The final date when they may be released for sale is 15 June. Processing and initial packaging must be carried out within the production area identified above in order to guarantee product quality, control and traceability. Subsequent repackaging outside the geographical area is permitted.

Link: Recognition of the ‘Carota Novella di Ispica’ protected geographical indication is justified on the grounds of its early harvesting. The ‘Carota Novella di Ispica’ growing is characterised by favourable soil and climate conditions. The Ispica carrot is a ‘new carrot’ which reaches commercial maturity from as early as the end of February (20 February) up to the beginning of June (15 June). It is thus a novel, typically Sicilian product very closely linked to the territory on which it is grown. It should be added that ‘Carota Novella di Ispica’ is sold on the market during the winter-spring period, taking advantage of the organoleptic properties that are typical of the fresh product, such as crunchiness, intense flavour and herbaceous aroma.

The ‘Carota Novella di Ispica’ growing area is characterised by high average winter temperatures, long hours of sunlight and fertile soil. The quality parameters and the specific growing cycle are thus intimately linked to interacting physical and biochemical characteristics which make the Iblea area (SE Sicily) an essential harmonic system capable of maximising and characterising such properties. The local geography facilitates cultivation as the optimal environmental conditions and, in particular, the temperate, dry climate of the coastal strip enable optimum general plant health to be maintained. In the area in which ‘Carota Novella di Ispica’ is grown is generally free from excessive temperature drops, excessive rain and aridity. It has been shown that the temperatures recorded in the area favour very intense colouring, which is also to some extent a result of the amount of light from which the territory benefits between September and March, the very regular conformation and the optimisation of levels of sugar, beta carotene and mineral salt content which, considering the time of harvest, are a further characteristic feature of the ‘Carota Novella di Ispica’.

The land further complies with the requirements for growing, which ideally calls for medium soils tending towards loose, a non-coarse soil skeleton, well provided with nutritive elements, good depth and freshness characteristics, but is also feasible in soils tending towards sandy as long as they are supported by adequate fertilisation and irrigation. These are the conditions that have led to the success of the ‘Carota di Ispica’. Indeed, old producers remember that European importers claimed to be able to recognise a load of ‘Carota Novella di Ispica’ immediately upon opening the transport wagon thanks to the specific and intense aroma which developed.

The first documents recording Ispica carrot cultivation date back to 1955, followed a few years later by the first records of its being exported. Since the 1950s, Ispica carrot growing has extended gradually to cover the area defined above, due on the one hand to the agricultural phenomenon of soil fatigue but, on the other, to the product’s great commercial success on national and foreign markets. The carrot was preferred on account of its early availability, quality in terms of shape (size), organoleptic properties (colour, flavour), chemical properties (carotene and glucose rich).’