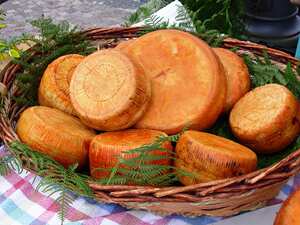 Caprino della Limina is an unpasteurised goats’ milk cheese which is produced from November to July in Parco dell’Aspromonte and in the communities of Montana della Limina (Reggio di Calabria). Kid's rennet is added to it and it is left to sit for one hour. Once the curd forms, it is stirred with a wooden spoon to break it up. The curd is then placed in rush baskets and pressed to remove excess whey.

The cheese is removed from the mould and salted and placed back into the mould for a day and then removed and aged in a cellar. The rind is brushed with olive oil as it ages for between a few weeks to 12 months. The rind is straw-yellow in colour and has soft milk-white flesh that hardens as it ages past the third to fourth month.

Having neutral flavour when young, the cheese develops a more typically aromatic and characteristic as it matures.