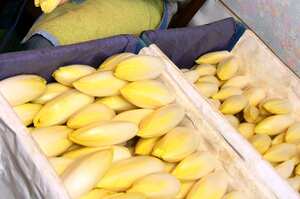 IGP/BGA Brussels grondwitloof refers to chicory heads obtained by forcing the roots Chicorium intybus L., var. foliosum Hegi (crop group chicory) of the Asteraceae (ex Compositae) family. Characteristic of the cultivation is that only seedfast (non-hybrid) grower's selections are used and that forcing takes place in soil and under casing soil. Through the casing soil the head grows in a balanced and cushioned environment, which benefits crispness and leaf structure. Characteristic of ‘Brussels grondwitloof’ is the crispness and the firm, slim head with a fine point, the fine leaf structure and a fresh, natural shiny leaf (without hair). The taste forms a good balance between bitter and sweet.

Each grower of ‘Brussels grondwitloof’ must register annually with the applicant group Brussels grondwitloof vzw. The register is submitted to the inspection body responsible. All packaging bears a label with the name of the grower or farm and a number. That number forms part of a consecutive numbering system which, together with the farm registration, ensures product traceability. The number may be replaced by another indication (e.g. a bar code) provided that this offers at least the same guarantees as regards traceability. In order to guarantee quality, traceability and control, ‘Brussels grondwitloof’ must be sorted, packed and labelled either on the farm where it was grown or at another location under the direct supervision of the grower or his representative. Packing and/or labelling by (intermediate) traders is expressly excluded.

Packing and labelling on the farm, or under the direct supervision of the grower or his representative, is intended to guarantee origin and to ensure control. The producers' organisation wishes to prevent chicory of uncontrolled origin from being packed, labelled and placed on the market as ‘Brussels grondwitloof’. The sale of ‘Brussels grondwitloof’ takes place largely via the classic sales channels for fruit and vegetables: wholesale and retail, auctions and other forms of sales cooperation. There is now already a significant difference in price between ‘Brussels grondwitloof’ and hydroculture chicory. This makes fraud and deception attractive. Such fraud damages the reputation of ‘Brussels grondwitloof’. Also, in order to maintain quality the chain between harvesting and packing should be kept short as this benefits final quality. Excessive handling adversely affects the quality of (soil-grown) chicory, which remains a fragile and easily-damaged product.

‘Brussels grondwitloof’ is a vegetable which is obtained by means of a dual cultivation process: root cultivation followed by forcing or drawing.

— The roots grow during the summer in open fields. Around May own or bought seed from growers' selections is sown for this purpose. By means of careful sowing and thinning, each plant is given equal growing space so that uniform, moderately thick roots are lifted. This is very important for obtaining chicory heads of equal size and high quality. In the autumn, before severe frost occurs, the roots are lifted and the leaf is cut away. About 2 to 3 cm of leafstalk remains in order to leave intact the final bud from which the chicory head has to grow. The roots are grown using integrated and organic cultivation methods as far as possible.

— For drawing or forcing, the roots are placed side by side upright and slightly slanting in holes or chicory beds and covered with a 5 to 20 cm thick layer of crumbly soil. This may be in the open air or in a chicory shed. Without heating, the chicory holes in the open air will be ready for harvesting in early spring (March or April). Later harvesting is possible with extra late selections and by means of growing techniques which ensure that the spring warmth reaches the buried roots less quickly. With soil heating (by means of traditional chicory kettles, central heating, etc.) the harvest can be moved to the desired time. Selections adapted to the time of harvest should be used (early, semi-early, winter, semi-late, late). The harvest falls approximately three weeks after applying soil warmth. During drawing, the holes are protected from the weather (inter alia precipitation, wind, light and cold) by covering material.

— Once the heads are ready for harvesting, the whole plant is harvested in one go. This is necessary for optimum quality of the end product. The head is separated from the root, after which cleaning follows.

— During the harvest, roots are selected for seed cultivation. For this, the best combinations of root and head are chosen on the basis of criteria laid down in the product specification. These seed roots are kept until planting in the early spring. After planting, seed stalks grow out of the roots and in August these are cut off, bundled and placed in heaps for further ripening. Once ripe, the seed carriers are threshed, cleaned and sorted in order to obtain suitable sowing seed for subsequent cultivation.

Typical ‘Brussels grondwitloof’ cultivation has come about through a combination of history, natural conditions and know-how. ‘Brussels grondwitloof’ has a rich history and tradition. Until the beginning of the 19th century, vegetables were grown within and outside what is now the Brussels inner ring road (the former city wall) in marshy areas by vegetable growers called ‘boerkozen’. Among other things, the Brussels ‘boerkozen’ grew ‘capucienenbaard’ for which they used thick roots, and over time they concentrated on improving the first shoot. In this way the ‘Brusselse capucienenbaard’ automatically developed into the chicory heads of today.

The growers organised themselves into ‘chicory syndicates’ to promote sales and exports. These syndicates concentrated on selling chicory at markets further afield in Belgium, and abroad. As early as 1862 chicory was exported to Paris and from 1872 onwards regular export gained momentum. Over the following decades chicory became Belgium's most important export vegetable.

As regards soil conditions, sand-loam and light loam soils predominate in the geographical area. These are ideally suited for use as covering soil when forcing soil-grown chicory. When they dry out, sandy soils quickly provide a dusty covering soil which dirties the chicory heads while the quartz grains present chafe the epidermis of the heads causing red colouration and loss of quality. Heavy soils are difficult to crumble sufficiently fine in order to provide a good covering layer and strongly retain excess moisture, thereby facilitating misshapen heads and rotting.

‘Brussels grondwitloof’ seed cultivation, root growing and forcing requires extensive know-how on the part of the growers, as described above. The soil in which forcing takes place has to satisfy very stringent requirements in terms of structure and profile. Even in soils with a suitable texture, the grower will therefore still have to take the requisite technical cultivation measures (such as soil improvement and fertilisation, deep soil working, controlling the level of the groundwater table, etc.) in order to obtain an optimum forcing environment.

Within the geographical area, chicory growing became an important factor not only for economic but also for social development. The impact of ‘Brussels grondwitloof’ cultivation became evident in many facets of social life such as local chicory balls with ‘Miss Chicory’ contests, and parades and processions featuring giant chicories.