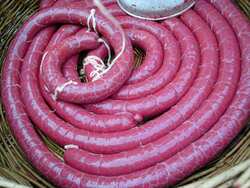 Some cultures consume blood as food, often in combination with meat. This may be in the form of black pudding, as a thickener for sauces, a cured salted form for times of food scarcity, or in a blood soup. The Maasai of Tanzania consume the blood of cattle which is let directly from the neck of the live animal and the wound allowed to heal. The blood is then mixed with milk.

Types of food with blood

Blood sausage or black pudding is any sausage made by cooking animal blood with a filler until it is thick enough to congeal when cooled. Pig or cattle blood is most often used. Typical fillers include meat, fat, suet, bread, barley and oatmeal. Varieties include drisheen, moronga, blood tongue, kishka (kaszanka), biroldo, mustamakkara, verivorst, and many types of boudin.

Blood pancakes are encountered in Scandinavia and the Baltic; for example, Swedish blodplättar, Finnish veriohukainen, and Estonian veripannkoogid.

Blood is also used as a thickener in sauces, such as coq au vin or pressed duck, and puddings, such as tiết canh. It can provide flavour or colour for meat, as in cabidela.

Blood can also be fried and eaten fresh, right away after the animal is slaughtered. In Hungary when a pig is slaughtered in the morning the blood is fried with onions and is served for breakfast.

Drinking blood is a strong taboo in many countries, and is often vaguely associated with vampirism (the consumption of human blood).

Followers of Judaism, Islam and the Iglesia ni Cristo are forbidden to drink blood or eat food made from blood. In Judaism all mammal and bird meat (not fish) is salted to remove the blood. Jews follow the teaching in Leviticus 17:10-12, that since "the life of the animal is in the blood", no person may eat (or drink) the blood.