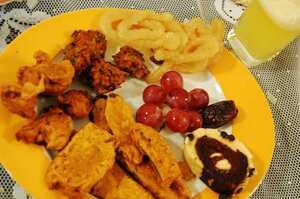 Beguni (Bengali: বেগুনী) is a Bengali snack made of aubergine (eggplant or brinjal) slices deep fried in batter. The similar European version is known as aubergine fritters.

Longitudinally cut slices of aubergine are dipped in a batter of Bengal gram flour with salt and turmeric and deep-fried in mustard oil. It is commonly consumed with puffed rice. It is extremely popular street food in the cities and is an evening snack in Bengali households. It is a very common component of Iftar in Bangladesh, during the Muslim month of Ramadan.

Beguni is also a quintessential component of the Bengali monsoon cuisine, where it is consumed along with a rice and lentil dish called Khichuri.