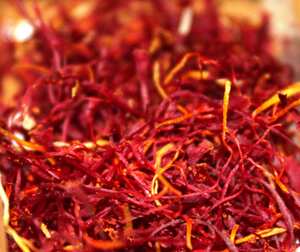 Description: Saffron (Crocus sativus L.) is a bulbous plant belonging to the Iridacea family. The spherical corm is fleshy, with a diameter of 2 to 3 cm, and is covered with brown-grey reticulate membranes. Between October and November, each bulb produces 1 to 3 flowers, which form a tubular shape before opening into a lilac-purple cone. This is the rose of saffron, and has long narrow petals which eventually open out to reveal its interior. Inside is the ovary, from which emerge the three yellow stamens and a white filament, and the style, which divides into three red fibres or stigmas: the saffron threads or cloves. Saffron in the form of a spice comes from the stigmas of these flowers attached to their respective style, once they have been sufficiently dried using the process described below.

Physical characteristics: Azafrán de La Mancha DOP is easily recognisable because its red stigmas protrude from the flower and the style is shorter than in flowers of other varieties. It must be sold exclusively in threads, never in powdered form. The threads must be strong and pliable with brilliant red stigmas. The ratio stigma: style length must be greater than one, with a tolerance value of 1 %. The stigma must not be less than 22 mm long, with a tolerance value of 1 %. The content in floral residue (styles which have become detached from their stigmas, stamens, pollen and pieces of petals or ovary) must not exceed 0,5 % of the total weight. A maximum of 0,1 % of foreign matter is permitted. Foreign matter is any vegetable residue which does not come from the saffron flower: minerals (sand, soil or dust), parts of or whole dead insects, etc. The product must not contain mould or live insects.

Organoleptic characteristics: aroma: exclusive to the drying process, intense and penetrating, mixed with a faint scent of corn or dried grass with floral overtones. Olfactory-gustatory sensation (in infusion): a long-lasting and mild taste, bitter at first and later with a persistent flavour of corn and the drying process

Geographical area: The geographical area is situated within the autonomous region of Castile-La Mancha, and encompasses districts of La Mancha in the provinces of Toledo, Cuenca, Ciudad Real and Albacete.

Proof of origin: Saffron produced in this region is easily recognisable, since it has protruding red stigmas and very short styles. The manufacturing process, which consists of drying the product by toasting it over a slow fire rather than by sun-drying, seems to be the reason for the end product’s higher quality, intense aroma, increased safranal content and colouring power.

Under this scheme, it will be obligatory to keep records and to be able to correctly identify, at all times, saffron eligible for the designation of origin. In the event of inferior quality products being identified, appropriate measures will be taken. These will include the suspension and definitive withdrawal of certification, obliging the consigner to withdraw the faulty goods from sale.

Method of production: Traditionally, the bulbs are planted between the second fortnight in June and the first fortnight in September. When the plant blooms, all the open flowers are picked daily before they become withered. This normally takes place over a period of approximately 30 days in October and November, depending on the climatic conditions of the particular year.

Great care must be taken when picking the flowers. They must be cut cleanly and precisely so as to prevent the stigmas from separating or becoming detached. The flowers are taken to be trimmed without being crushed or overheated in transit. They are laid out to be aired on sacks, canvas or firm soil in fine layers. They must not be piled up. The flowers are always trimmed within 12 hours of picking. This process involves cutting the stigmas, attached to their styles, at the place where the styles are beginning to turn white.

In preparation for the drying process, the trimmed stigmas are laid out on flour sieves with wire or silk mesh of a suitable size for the heat source. They are placed in layers of a maximum depth of 1,5 cm. The saffron is toasted for 20 to 45 minutes by heat produced from braziers, stoves or any other suitable indirect source providing a constant and uniform heat which does not contaminate the product with alien flavours or aromas.

Genuine Azafrán de la Mancha is available in the UK from ThePaellaCompany.co.uk and Bellota