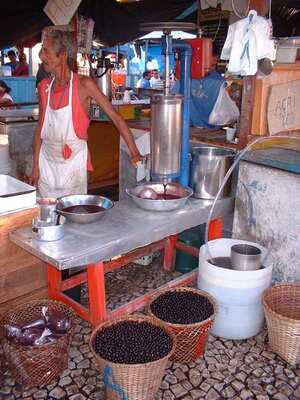 The açaí palm and fruits

The açaí palm is a member of the genus Euterpe, which contains 7 species of palms native to tropical Central and South America, from Belize south to Brazil and Peru, growing mainly in floodplains and swamps.

The fruit, a small, round, black-purple drupe about 1 inch (25 mm) in diameter, similar in appearance and size to a grape but with less pulp, is produced in branched panicles of 700 to 900 fruits. Two crops of fruit are produced each year. The fruit has a single large seed which makes up to 8-% of the fruits volume.

The juice and pulp of açaí fruits are frequently used in various juice blends, smoothies, sodas, and other beverages. In northern Brazil, açaí (or jussara, which is one of the fruit's common folk names) is traditionally served in gourds called "cuias" with tapioca and, depending on the local preference, can be consumed either salty or sweet. Açaí is widely consumed in Brazil as an ice cream flavour or juice.

As the high fat content of açaí indicates it would deteriorate rapidly after harvest, its raw material is generally available outside the immediate growing region only as juice or fruit pulp that has been frozen or processed as a pulp powder or freeze dried powder. Several companies now manufacture juices, health drinks, yogurts, and sorbets made from açaí berries, often in combination with other fruits.

Açaí is one of the growing superfruits.