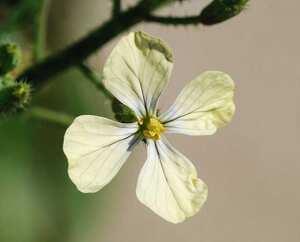 Rocket, arugula or rucola is an edible plant of the cabbage family. The flowers are edible, though not as good as the leaves.

It has a rich, peppery taste, and is exceptionally strongly flavoured for a leafy green. It is generally used in salads but also cooked as a vegetable with pastas or meats. In Italy, it is often used in pizzas, added just before the baking period ends or immediately afterwards, so that it can wilt in the heat. It is sometimes used as an ingredient in pesto, either in addition to basil or as a (non-traditional) substitute.

It's another good contender to grow at home if you have the room.

Rocket is at its best and in season during the following months: April, May, June, July, August, September & October.